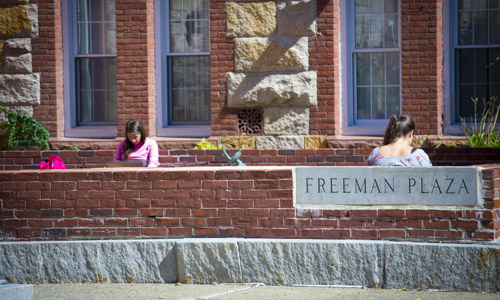 Freeman Plaza was constructed in 1977 with a gift from Howard Freeman ’40 and his wife, Esther. Freeman earned a degree in mechanical engineering at WPI and became a well-known inventor and entrepreneur. During World War II, he invented the waterfog nozzle, a device that extinguished oil fires with sea water, saving many ships and thousands of lives. He also invented a fire-fighting fogfoam nozzle used on airport crash trucks and founded the Jamesbury Corporation in Worcester.

Reunion plaza was created in 1996 after WPI reached a deal with the city of Worcester to close West Street to vehicle traffic between Institute Road and Salisbury Street. The plaza and fountain were made possible in large part by the Class of 1956 on the occasion of its 40th Reunion, and by Mr. and Mrs. Elmer Hansen ’26. WPI students frequently congregate on the stone benches around the plaza and eagerly look forward to the turning on of the fountain each spring.