In stepping up to the ALS Ice Bucket Challenge at Reunion Plaza Monday afternoon, WPI President Laurie Leshin mixed some fun with a serious message: donate to help find a cure for a disease that has hit close to home.

Joined by a team of senior administration, Gompei the goat and a couple of robots, Leshin prepared for her icy deluge at the fountain, with a throng of hundreds of students, faculty, and staff watching and shooting photos with their phones.

Leshin explained that she had been challenged by Jagan Srinivasan, an assistant professor in biology and biotechnology here at WPI, by Worcester Mayor Joe Petty, and by President Tom Rosenbaum of Cal Tech. But the fun and raucous cheering was tempered by the seriousness of her remarks about ALS, also known as Lou Gehrig’s Disease, a progressive neurodegenerative disease that affects nerve cells in the brain and the spinal cord.

“We also do it from a serious perspective,” she said. “Our chairman of the board emeritus and member of the Class of 1974, Steve Rubin, who our Campus Center … is named for, was diagnosed with ALS a couple of years ago, and has already taken the Ice Bucket Challenge himself. I have already given in honor of Steve, and would ask all of you to do so as well, to help him manage, and to help others manage this terrible disease.”

Leshin explained her role in the ALS fundraiser and awareness campaign during a walk from the Rubin Campus Center to the fountain, stopping to show a robotic wheelchair developed at WPI that could help someone stricken with ALS with better mobility and independence.

ALS, also known as Lou Gehrig’s Disease, a progressive neurodegenerative disease that affects nerve cells in the brain and the spinal cord.

“The ALS community has a motto: ‘Technology is the cure until medicine proves otherwise.’ Here at WPI, we’re doing groundbreaking research in both the science and technology to help fight diseases like ALS. We’re working on fundamental science to help understand the ways to a cure, but in the meantime we’re inventing smart technologies like this smart wheelchair that people afflicted with ALS can use to manage their disease more effectively, using wearable technology, and robotics. And our faculty, like Taskin Padir here, are making that a reality. 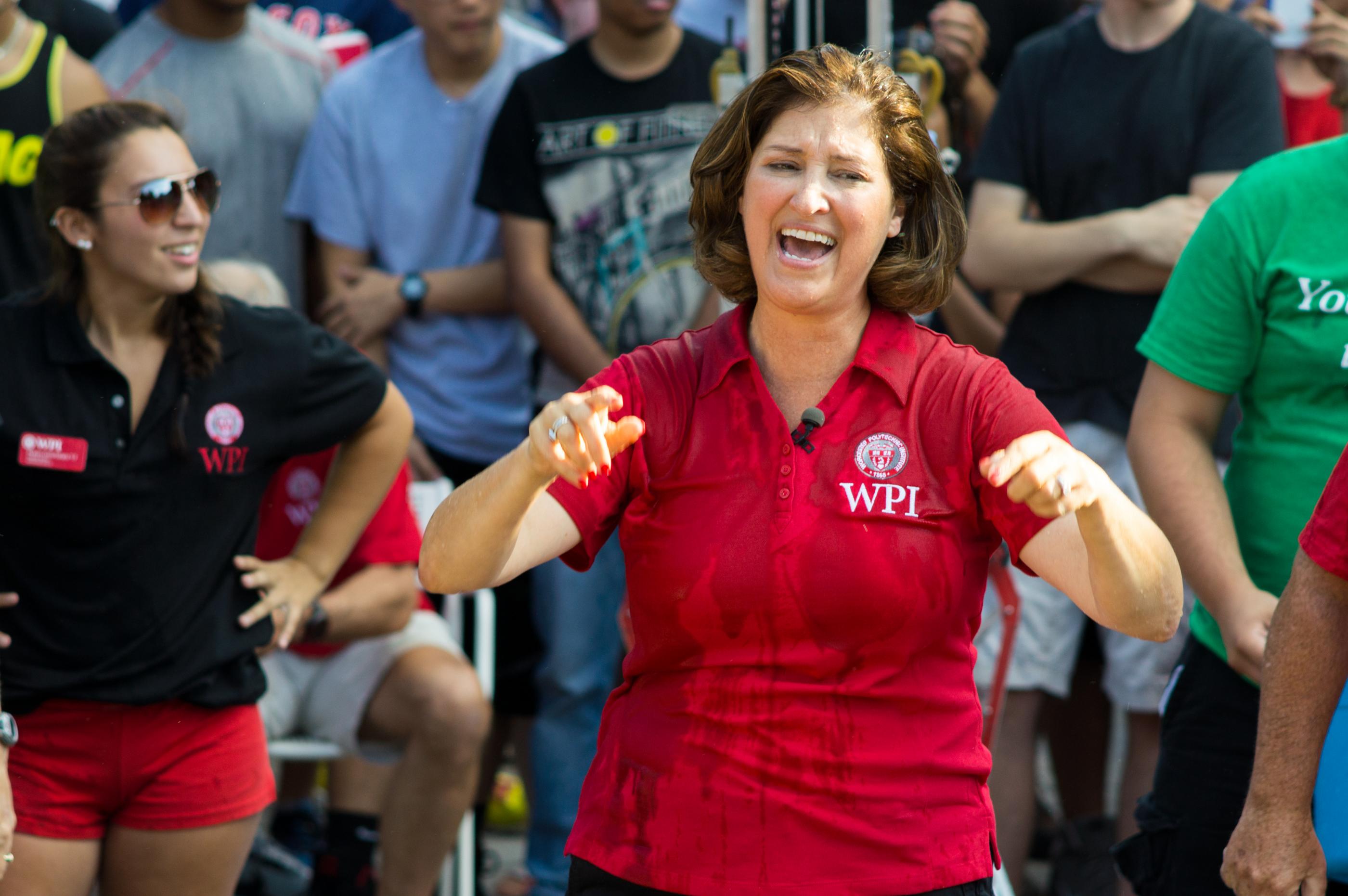 “… So, here at WPI we’re doing groundbreaking research, and now we’re going to do some research on what happens when a robot and a goat conspire to dump an ice bucket on a president,” she said, as WPI’s Oryx robot wheeled onto the plaza, delivering a bucket of ice to Gompei, who then poured the ice into a bucket of ice held by Team 190, the WPI-sponsored robot used to compete in FIRST Robotics events. After Team 190’s controller arm raised the bucket of ice water over Leshin’s head, she led the crush of onlookers in a countdown, concluding with Team 190 cascading the icewater over Leshin, while students poured buckets over the members of the administrative staff.

As of Tuesday, (Aug. 26), The ALS Association has received $88.5 million in donations, due in large part to the series of ice bucket events that have taken place around the country, the association said on its Website.