Carl Clark ’45 is known for his research on airbag safety systems and advocacy for highway safety, which led to the first use of airbags in cars. But before he became involved in that work he had a job that played an important role in preparing the earliest American astronauts for the rigors of spaceflight.

After earning a PhD in zoology at Columbia University, Clark became head of the Biophysics Division at the Aviation Medical Acceleration Laboratory at the Naval Air Development Center outside of Philadelphia. Part of his job involved conducting experiments and pilot training using a giant centrifuge that could spin human beings at high speeds, simulating the G forces pilots encountered in jet aircraft.

Mercury astronaut Wally Schirra prepares to enter the gondola of the centrifuge at the Navy’s Aviation Medical Acceleration Laboratory, which Carl Clark ’45 turned into a pioneering dynamic flight simulation system.

When he arrived, the centrifuge, with its 50-foot arm and 4,000-horsepower motor, was being run in what he calls "merry-go-round mode," but he knew the machine had gimbals that permitted the gondola to be tilted in virtually any direction as it was spun around. With proper control, these could allow a pilot to experience the effects of changes he made in the attitude of his simulated airplane.

He installed mock cockpits in the gondola and connected the centrifuge to the Naval Air Development Center’s ENIAC II computer. Clark told the WPI Journal in 1997 that this the algorithms he wrote to control the gondola constituted a major breakthrough in dynamic flight simulation.

In 1957 he was named program director for a project that contributed to the design and testing of NASA’s X-15 experimental aircraft. Clark and his team would also be responsible for using their expertise in dynamic flight simulation to conduct training exercises for the X-15 pilots and to demonstrate that the pilots could withstand flights in the craft, which was designed to travel at more than 4,000 miles per hour to altitudes in excess of 100 miles.

The simulations contributed to the design of a special head restraint developed for the X-15 and demonstrated the need for replacing the traditional center-stick control with side-arm controls that pilots could more easily manipulate under high Gs. Most important, they familiarized the X-15 pilots with normal and emergency flight acceleration conditions before they made actual flights.

That work led to a contract to train the seven astronauts chosen to inaugurate America's manned spaceflight program by flying the tiny Mercury capsule into Earth orbit. A full-scale, working simulated capsule was installed inside the gondola and the astronauts flew simulations of normal and emergency flight procedures. 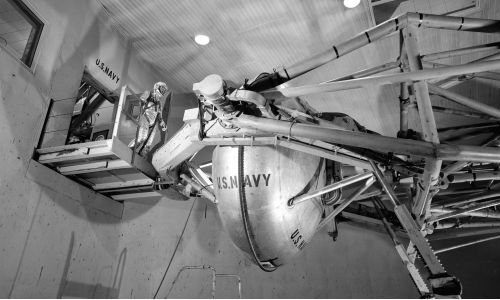 Two emergency maneuvers were of particular concern to NASA. The first, a launch abort requiring the use of the rocket-powered escape tower, would expose an astronaut to 11 Gs. Even more severe was an emergency reentry, which could generate up to 25 Gs.

"An astronaut would have experienced 11 Gs when the escape tower fired and again when the rockets shut down and the capsule was slowed by air resistance," Clark said. "People had never been through that experience.

“I did the initial trials myself. In small steps, we spun the centrifuge up to 11 Gs and then quickly turned the gondola 180 degrees to get 11 Gs in the opposite direction. It was an imperfect simulation, because as the gondola turned, we had to rotate through the point where my feet were facing down and much of the blood drained from my brain. I was right at the edge of unconsciousness and experiencing tremors. The astronauts themselves were trained only up to 6 Gs."

The 25 G emergency entry nearly put a halt to the Mercury program, Clark said, because the Washington physician advisors didn't think people could live through such extreme forces. "It wasn't until Carter Collins, lying in the special custom molded couch that NASA designed for the Mercury capsule, withstood 25 Gs on the centrifuge and walked out of the gondola, that they dropped their reservations."