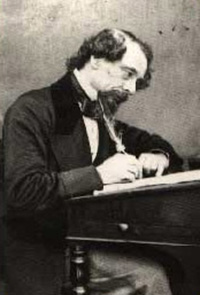 A Resource for Scholars

Through brilliant novels like David Copperfield, Little Dorrit,and Great Expectations, Charles Dickens defined the Victorian era and helped shape our understanding of this important period in British history. He is one of the most studied writers in English, and among the most widely read of all authors. Thanks to the generosity of an educator and collector in California, WPI is home to a remarkably rich collection of Charles Dickens materials.

The Robert D. Fellman Dickens Collection, acquired by WPI in 1995, has established the university as the premier source for Dickens materials in Central Massachusetts. The late Robert Fellman chose WPI as the site for his life's work as a collector for two reasons: he was attracted by the innovative nature of the WPI Plan, the university's project-based undergraduate program that prepares technologically aware humanists and culturally sophisticated and flexible engineers and scientists for satisfying careers and, more important, for the continual explorations, adaptations, excitements, and surprises of life; and he was aware that Worcester, the second largest city in New England, lacked a first-rate Dickens collection.

Housed in WPI's George C. Gordon Library, the collection contains a wealth of materials of extraordinary value to scholars and students of Dickens and the Victorian era. It is available during the hours of 8 a.m. and 4 p.m., Monday through Friday, or by appointment. Through the express wish of the donor, the collection is available to members of Dickens Fellowship chapters worldwide.

The Robert D. Fellman Dickens Collection includes more than 150 volumes of Dickens' writings (including rare first editions of almost all of his major works); more than 35 manuscripts and autograph letters; 325 volumes in sets; 168 volumes of Dickens-related periodicals; about 150 volumes of letters, biographies, and illustrations; and about 275 volumes of reference works, criticism, and commentary on the novel, Dickens' England, the Victorian period, and related English authors. Also available to scholars are a variety of art objects (including many examples of the best 19th century book illustrations) and a valuable set of Dickens-related slides and videotapes.

Dickens' handwriting is well represented in the collection. There are eight original autograph Dickens letters--several of substantial length and significance. Perhaps the most notable item in the collection is the unique council attendance book for the Guild of Literature and Art. This book records (by signature) those attending meetings of the council between 1854 and 1896. It includes many signatures of Charles Dickens, as well as the signatures of several other Victorian luminaries.

Robert Fellman and Charles Dickens became good friends when Fellman was just 13. On a trip to the high school library in the small town of Red Lake Falls, Minn., where Fellman was born, he decided to check out a book with the curious title, The Posthumous Papers of the Pickwick Club, one of Dickens' earliest works. Fellman was attracted by the Victorian author's humor, his sense of character, and his uncanny ability to draw a reader into his world.

In 1958 he joined the faculty of the newly founded Foothill College in Los Altos Hills, Calif., where he served as chairman of the Department of Physical Sciences and Mathematics and as an instructor of chemistry and physical science. His interest in Dickens remained that of a devoted fan until the early 1960s, when he received a set of original early 20th century watercolor illustrations of Dickens characters as a gift. The gift led to an interest in collecting Dickens illustrations.

In time, this fascination led to a love of all things Dickensian, and he began to amass a first-rate collection of books by and about the author, as well as artifacts and memorabilia related to Dickens. Over time, his Palo Alto, Calif., home was filled with the products of his collecting.

He enjoyed sharing his collection through exhibits and a summer course at Foothill College. On behalf of his students, he received a charter from the London-based Dickens Fellowship for a Palo Alto chapter of the society and served as its first president.

Fellman died in Palo Alto in 1996. His generous bequest to WPI supports the maintenance and continuing growth of his collection.

Project Boz is an initiative to digitize all of Charles Dickens's novels in their original serial form. Project Boz was made possible by a Library Service Technology Act grant from the Massachusetts Board of Library Commissioners.