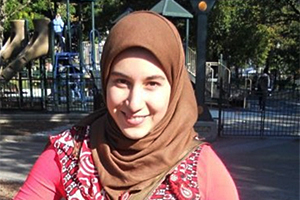 Congratulations to Nouran Abdelfattah ’13, a double-major in biology/biotechnology and biochemistry, who has been named a 2013 Gates Cambridge Scholar.  Gates Cambridge Scholarships cover the full cost of studying for a postgraduate degree at Cambridge, including all University and College fees and a living allowance.  They are among the most prestigious scholarships for graduate study in the world.

Nouran, a senior from Cambridge, Massachusetts, will study for the MPhil in Clinical Science (Translational Medicine and Therapeutics) at Cambridge.  She plans to attend medical school after this one-year program. Nouran has extensive research experience and is completing her major project on proteins in T-cell Acute Lymphoblastic Leukemia at the Harvard Medical School Department of Pathology under the direction of Dr. David Langenau. She had previously served as an intern at the Harvard Stem Cell Institute, Biogen, and the Broad Institute of MIT and Harvard. Nouran also did research in Prof. Reeta Prusty-Rao’s laboratory at WPI’s Gateway Park.  At WPI, Nouran has been a Peer Learning Assistant in courses on genetics, organic chemistry, and introduction to biology and biotechnology. She was President of Mu Sigma Delta Pre-Health Society, Senator in the Student Government Association, and played a leading role in founding the new WPI chapter of Alpha Epsilon Delta, the national pre-medical honor society. She has been a member of the service fraternity Alpha Phi Omega and a volunteer at Mass General Hospital in Boston. Nouran was the recipient of WPI’s Two Towers Prize in 2012.

The Gates Cambridge Scholarship program was established in 2001 when the Bill & Melinda Gates Foundation donated $210 million to the University of Cambridge. The Scholarships are awarded to exceptional applicants from outside the United Kingdom to pursue a full-time postgraduate degree in any subject available at Cambridge.  Since the scholarships were established, more than 1,100 students from more than 95 countries have studied as Gates Cambridge Scholars.

Congratulations to Nouran on this impressive achievement! She is WPI’s first Gates Cambridge Scholar.

For more information about the Gates Cambridge Scholarship : http://www.gatescambridge.org/