Project Presentation Day was held on April 21, 2016 where the seniors of every department presented their Major Qualifying Project. The Mechanical Engineering Department had a poster presentation competition for six different categories: Biomedical, Design, Manufacturing, Materials, Robotics, and Thermofluids. Our students from Materials Science and Engineering presented in this competition and the winners were as follows:

Also, three groups were chosen to present at the ASM meeting on April 21, 2016 at Dino's Restaurant in Worcester in order to win a scholarship. The winners were Matthew Ryder, Christopher Sample, Jinghan Wu; Advisor: Diana Lados. 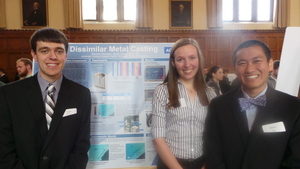 The aim of this project was to explore the nature of metallurgical bonds that can be created between steel and aluminum. Metallic coatings were utilized to facilitate the formation of quality bonds between the two dissimilar metals. Hot dipping experiments were performed to evaluate the effect of time and coating material. The introduction of zinc as a coating material improved the bond quality; attempts to use a more complex metal matrix material were unsuccessful due to challenges with its creation. The conclusions drawn from this research provide a basis for better understanding of the mechanism of metal diffusion over time and the subsequent bond formation. 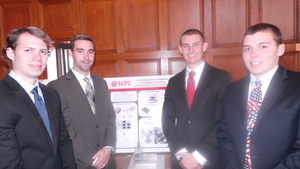 This project focuses on finding a possible correlation between surface roughness and coefficient of friction for elastomer compounds used in making shoe soles. The surface of the elastomer compounds were measured with a confocal microscope to obtain topographical data. Analysis techniques were used to understand the area of the surface and determine at what micrometer scales the surface should be analyzed. This process helps to determine the scales in which two surfaces could be considered different. An apparatus was designed to test the tangential and normal components of the coefficient of friction between the elastomer and counter face. The coefficient of friction measurements were regressed with the height parameters and the area scale complexity of the surface to attempt to find a correlation. 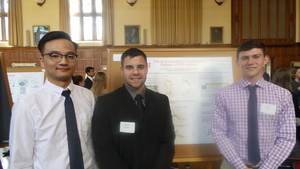 Effects of Intumescent Layering on the Pyrolysis of FRP Systems

Fiber Reinforced Polymers (FRPs) compose a versatile set of materials and offer several advantages over conventional materials in architectural applications such as exterior cladding and ornamental features. Manufacturers are developing a myriad of systems to improve these materials’ ability to meet fire safety regulations. Cone calorimetry is a bench-scale test those results can be used to estimate an FRP system’s performance in a full-scale fire test, and can be used to compare intumescent layered systems to established systems. Simulating cone calorimeter experiments in Gpyro, a comprehensive pyrolysis modeling program, offers the possibility of predicting FRP systems’ performances before they are fabricated. However, use of Gpyro in this application is in its infancy and requires fine tuning to accurately predict test results. This project compared the effectiveness of different fire-resistant FRP systems in terms of meeting building regulations and tested the efficacy of Gpyro at predicting cone calorimeter test results from material properties. 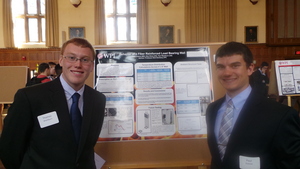 This report investigates in-plane load carrying behavior of a fiber reinforced polymer (FRP) wall exposed to localized flashover conditions.  The structural behavior under ambient and fire conditions was analyzed using engineering science principles to gain insight into the mechanisms behind the behavior.  Individual wall components and a scaled assembly were tested at ambient temperatures providing a baseline to compare with fire test results.  Two 8x4 foot FRP assemblies exposed to fire conditions were evaluated to determine their load carrying behavior. 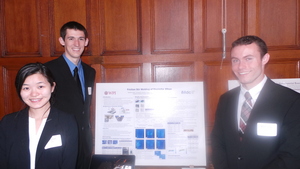 Friction Stir Welding (FSW) is a solid-state welding process that has demonstrated the ability to join both similar and dissimilar alloys, as well as materials unweldable by traditional fusion welding techniques.  Improved mechanical properties were reported often without the need for post-weld heat treatment.  To develop a fundamental understanding of the process, and broaden the range of applications in aerospace and automotive industries, it is imperative to establish relationships between welding parameters and weld quality, resulting microstructures, and tensile properties and microhardness.  A fixture was specifically designed and fabricated to accommodate different sample geometries, and the fixture material was selected based on heat transfer computations.  Similar and dissimilar FSW experiments using various rotation and traverse speeds were performed on three heat treated wrought aluminum alloys (Al6061-T651, Al2024-T351, Al7075-T735), located systematically on both advancing and retreating sides of the weld.  Quality index was first evaluated to assess and optimize the process.  Further, microstructural characteristics, including band spacing and grain size, have been measured and analytically correlated with microhardness and tensile properties in both traverse and longitudinal directions.  The results will be presented and discussed in the context of structural applications for the transportation industry. 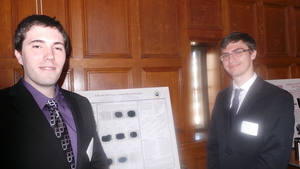 Silica aerogels are lightweight, highly porous, nanostructured materials with low density, low dielectric constants, and excellent thermal insulation properties. They are among the most easily fabricated aerogels due to the availability of required materials such as carbon dioxide, ethanol, and tetraethyl orthosilicate; and the relatively simple sol-gel chemistry involved. By using silica aerogels as skeletons, nanomaterials were easily and effectively structured in three dimensions to create electrically conductive, low density, and porous nanostructured networks. Aerogels doped with carbon nanotubes, graphene, tungsten disulfide, and molybdenum disulfide were fabricated by the liquid carbon dioxide supercritical drying of silica gels that were loaded with these nanomaterials. The dopants were introduced into the gels by dispersing them in ethanol, which acts as the pore liquid of the gels. The resulting aerogels, having properties that are tunable through dopant material and concentration, could serve as a fundamental design for future low density and porous networks suitable for catalysis, energy conversion, energy storage, tunable thermal properties, high compressibility and many other applications.