May help reduce U.S. dependence on China for rare earths.

WPI lab one of the only facilities in the nation able to conduct this research; may lead to gains for US auto industry and lessen dependence on China

In an effort to help develop a sustainable domestic supply of rare earth elements and lessen the United States' dependence on China for materials that are vital to the production of electronics, wind turbines, and many other technologies, two researchers at Worcester Polytechnic Institute (WPI) have developed a method of extracting rare earths from the drive units and motors of discarded electric and hybrid cars.

With support from WPI's Center for Resource Recovery and Recycling (CR3), Marion Emmert, assistant professor of chemistry, chemical engineering, and mechanical engineering at WPI, and postdoctoral fellow H.M. Dhammika Bandara conduct research at WPI’s Gateway Park in a specially equipped laboratory, one of the only such facilities of its kind in the nation.

Working there, the pair has created the novel method for processing drive units and electric motors to chemically separate rare earth elements – specifically neodymium, dysprosium, and praseodymium – from other materials used to make the devices. The goal is to recycle rare earths that would otherwise be lost in a sustainable and efficient manner. 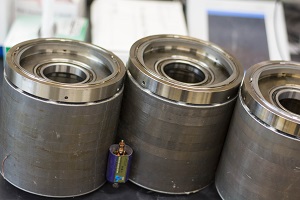 To test the process, the WPI researchers sliced the drive unit (which contains the electric motor and other components of the drive train) of an all-electric Chevrolet Spark vehicle into several pieces and then shredded the pieces. Using a two-step chemical extraction process, they were able to separate the rare earth elements and also recover other recyclable materials, including steel chips and other useful materials from the drive units.

The researchers say the technology has the potential to be an alternative source of rare earths, which could lessen the need to import these vital elements from China, which currently supply’s about 97 percent of rare earths used in manufacturing. Furthermore, since magnets containing rare earths are used in a wide range of technologies, including electric motors, wind turbines, and medical imaging devices, including MRI scanners – manufacturers would be able to improve the sustainability of their products by recycling these materials.

"The fact that China has the majority of operable separation facilities in the world is a huge problem for the United States," Emmert said. "Large car manufacturers are dependent on the magnets composed of these elements for car production, so it's really critical for rare earth recovery and separation technologies to take hold here."

WPI's Intellectual Property and Innovation department has filed a provisional patent on the recovery technology, and is beginning to market the technology in hopes of finding a licensee.

The research dates back to the spring of 2014, when WPI was named the lead institution on a $7.4 million, multi-university award from the U.S. Army that supported the development of new metallurgical methods and new lightweight alloys to help the military build more effective and durable vehicles and systems. Part of that research explored methods for extracting rare earth elements from ores found outside of China and for recovering those elements from recycled materials.