Fifty years ago, Floyd Wyczalek spear-headed the creation of fuel-cell vehicles. Now 93, he is poised to see his efforts come to fruition. 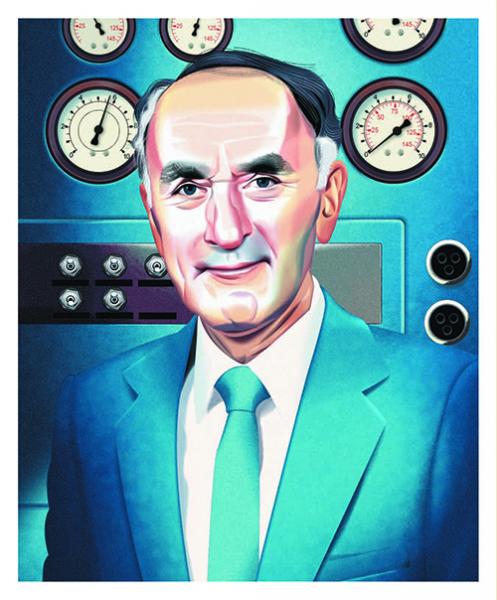 Growing up in Detroit, Floyd Wyczalek ’46 was practically fated to work in the automobile industry. “In the 1930s, US automotive technology was equivalent to Silicon Valley,” he says. “And Detroit was the automobile capital of the world. Automobile technology was inescapable—you were immersed in it.” As a General Motors engineer in 1964, he was tapped to develop a space-age technology spun off from the Apollo moon landing: hydrogen fuel cells.

Eventually, he helped develop the first hydrogen fuel cell car (the GM Electrovan, in 1966); and the first commercial fuel cell vehicle will be released by GM and Honda in 2020. Along the way he has inspired a new generation of WPI students through the establishment of the Floyd A. Wyczalek Science and Engineering Technology Scholarship. “America faces a critical shortage of qualified STEM candidates,” he says. “Technical institutions are forced to seek applications to staff positions from offshore nations. Therefore it is incumbent upon WPI alumni to attract and inspire potential STEM undergraduates.”

Wyczalek showed promise in science from a young age; scoring at the top in a 7th grade IQ test caused him to be automatically transferred to Flint Technical High School, which focused on creating new recruits for the burgeoning automobile industry. The outbreak of World War II sealed his career trajectory when he made it into a yearlong US Navy cadet officer training program at Dartmouth College. Successful graduates qualified for engineering programs at MIT or WPI, and Wyczalek chose the latter, completing six semesters in two years at WPI.

At WPI, he immersed himself in metallurgy, aerodynamics, machine design, and electrical engineering, graduating with a mechanical engineering degree in 1946. “That’s where I learned how to think and analyze challenges systematically,” he says. “The WPI two-year period established a ‘magnetic center’ that attracted and continues to determine all events.”

Based on the prestige of his degree, he was hired to teach engineering upon his return to Michigan at Lawrence Technological University and the University of Detroit, even as he started working at GM Research Laboratories. “WPI’s reputation as a prestigious STEM-focused university was highly respected throughout the academic world,” he says.

In the early 1960s, GM created a program to explore the possibility of a zero-emissions vehicle. The staff at the GM technical center responded by proposing two projects: a battery-powered electric vehicle based on a Chevy Corvair, and a hydrogen fuel-cell vehicle based on a GM Handi-Van that would be called the Electrovan.

To head the latter project, chief engineer Craig Marks tapped Wyczalek, who had to oversee construction of a fuel-cell powertrain simulator development test facility, as well as training a team of test engineers and technicians. “Except for principal engineering staff leadership,” he says, “most of the engineering team were not familiar with fuel cells.”

Wyczalek took the team of engineers to Pratt & Whitney, which was then developing fuel cells for use in the Apollo Project, the “moon-shot” launched by President John F. Kennedy to put a man on the moon by the end of the decade. Batteries then available didn’t have the capacity to provide electricity for life support and communications for the lunar module. The fuel cells module would create energy from a reaction of hydrogen and oxyge n, producing only heat and water as byproducts.

The fuel cells Pratt & Whitney designed, however, were too large and bulky to fit on a van, so Wyczalek created a joint project with Union Carbide to shrink them down into an acceptable size. They began the project in earnest in January 1966, with just 10 months to produce a drivable van in time for an international trade show in October. Eventually Wyczalek was overseeing a team of 200 people working in three shifts to develop the van, which rolled out of the plant in time for its triumphant test drive.

The final prototype had 32 fuel-cell modules lining the entire bottom of the van, with two large tanks of oxygen and hydrogen in back. It was able to travel an impressive 70 miles an hour, with a range of 150 miles. But with a weight of over 7,000 lbs., acceleration was poor. The high costs of platinum needed to create the system, as well as safety concerns about hydrogen catching fire, shelved the project soon after, and the Electrovan went into storage in a warehouse for more than 30 years.

Starting in 2000, however, GM revived its fuel-cell program, and rediscovered the Electrovan, which it now proudly displays in a museum in Sterling Heights, Mich. Since then, the company has produced 11 fuel-cell prototypes, including the Chevy Colorado ZH2 pickup truck,which the US Army will subject to extensive testing this year. The Electrovan has served as an early model for fuel-cell vehicles now under limited production by Hyundai and Toyota.

Last year, GM announced a project with Honda to create a new fuel-cell manufacturing plant in Brownstown, Mich., that could produce vehicles for commercial ownership as soon as 2020. Wyczalek hopes to participate in the dedication ceremony for the plant, a fitting testament to the innovative project he helped launch and bring to fruition five decades ago. “I continue to reflect and marvel with wonder and humility at opportunities that continue to materialize unexpectedly,” he says. “What really matters is intense homework, subconscious intuition, literature research, and pure luck.”