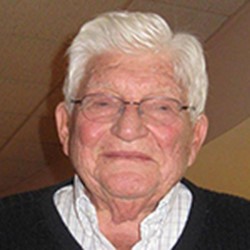 Alvin Harvey Weiss was born on April 28, 1928 in Philadelphia, Pennsylvania.

Alvin Weiss graduated from the University of Pennsylvania with a B.S. in Chemical Engineering in 1949. He took his Master of Science at Newark College of Engineering. His first jobs were a chemical engineer for the Fiber Chemical and Colgate-Palmolive companies and a research and development project engineer for Houdry Process & Chemical Co. He would return to University of Pennsylvania and obtained a Doctor of Philosophy in Physical Chemistry in 1965.

Dr. Weiss had been a lecturer and research investigator at University of Pennsylvania for three years before he joined the WPI faculty in 1966. 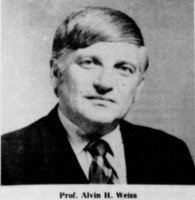 Throughout his career Prof. Weiss received many grants and awards to teach at institution around the world. He received a grant from the Department of State to lecture in chemical engineering at the University of Negev in 1967. In 1974, he was a Fulbright-Hays visiting lecturer department chemical engineering Middle East Technology University, Ankara, Turkey, 1974, visiting professor, Turkey, 91. Prof Weiss was a founding member of WPl's zeolite team. Weiss also studied catalysis related to petrochemicals, ceramics, pollution control, and fire protection.

During his career at WPI, Prof. Weiss researched many areas including catalysis, zeolites, and pyrolysis.  He was passionate about international collaborations, including with academics in Russia, Bulgaria, Hungary, and South America. Weiss formed the USA/Bulgaria research Collaboration in Catalysis in 1989. 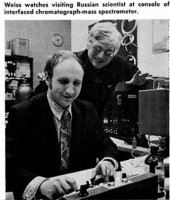 Prof. Weiss retired from WPI in 1994 and has since served as Professor Emeritus.

Aged 93, Alvin passed away March 6, 2022 and is survived by daughter Linda and wife Devorah.

On the aging phenomenon in palladium catalysed acetylene hydrogenation

Reactions of acetylene during hydrogenation on Pd black catalyst

Synthesis and utilization of formose sugars