The Sotak Lecture in Biomedical Engineering is given annually by a distinguished speaker in honor of Professor Christopher Sotak who was a leader and mentor at WPI as the department head from 1999-2006.This annual event perpetuates Chris’s passionate commitment to supporting and promoting innovative scholarship and research efforts in the field of bioengineering.On March 18, this year’s speaker was Professor Gilda Barabino, PhD, the Dean of the Grove School of Engineering at City College of New York. 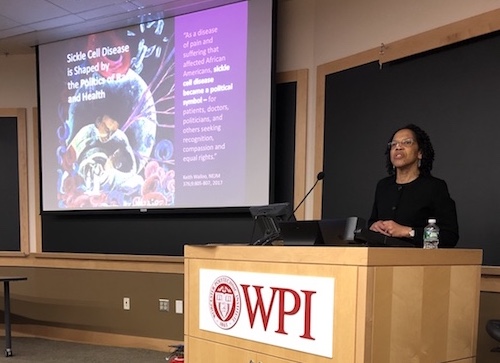 Professor Barabino described how she began her research with sickle cell anemia in her interest to give back to the community and have a broader impact in medicine and biomedical engineering. She started off her lecture showing us the newest gene therapy breakthrough for sickle cell anemia and its promising results. She continued to inform us about the international need for a sickle cell disease (SCD) cure. The disease is more prevalent in countries which have a higher incidence of malaria. Studies have found that the genetic mutation evolved as a defense mechanism for malaria and though true that the individuals with SCD did not contract malaria, they instead had complications and died from SCD because it causes the destruction of organs and bones all over the body. The life-expectancy of individuals with SCD is at most the mid-forties.

In her research, Professor Barabino uses a flow chamber to model the blood vessels in the body which shows the behavior of the sickle cells and their abnormal adhesion to the vessel walls. Her research also includes mice that were manipulated to have SCD. Their bones and spleens were examined and compared to normal mice. The sickle bones were found to have problems with necrosis and deterioration with age. Aging coupled with SCD has a dramatic effect on the bones over time. They also examined the effect of glutamine on the mice and found that it decreased the size of their spleens (enlarged spleens are an effect of SCD) and helped to maintain healthy bone tissue in sickle mice. They discovered that glutamine is mitigating bone resorption.

Professor Barabino has found that there is a mechanical difference between the sickle and the normal cells so the next steps are to determine what the mechanisms are that make up those differences. Her lab is continuing these studies to discover what is happening with the bone cells mechanistically and delving more into the role that glutamine has on sickle cell anemia. This research will also give light to what is happening to the other tissues in the body and work toward the discovery of new therapeutic opportunities for SCD.