Bryce Wade connected on two field goals, including the game winner from 26 yards out with 3:52 left, to lift Football to a 6-3 win over No. 19 RPI and capture the Transit Trophy for the first time in three years. The meeting was the 113th all-time between the teams and the 40th for the Transit Trophy.   After Wade put hosts ahead, RPI drove down to the WPI 35 but Joe Kerkach forced a fumble after pass reception that was recovered by teammate Nick Ostrowski. WPI was forced to punt with just seconds remaining, but RPI went backwards on a lateral deep in their own end and a tackle ended the game and sent the Boynton Hill faithful into a frenzy.

Ali Gannon collected her fifth career win as Field Hockey defeated visiting Elms, 4-0, in a Saturday morning contest played on Rooftop Field. Gannon was called upon once in the effort. The Engineers remain unbeaten on the year at 5-0, and are now 2-0 all-time on the roof.  In the first half, Carly Cidado scored following an assist by Abby O'Sullivan at 3:16. Kaitlyn Hess later made it 2-0 early in the second period at 17:20.

Jackson Conroy and David Lapointe each scored twice to lead Men’s Soccer to an 8-0 victory over host Mass Maritime in a non-conference match Saturday afternoon at Clean Harbors Stadium. With the triumph, the Engineers move to 3-1-1.  Four other players, Mark Calnan, Zane Carey, Luke Lindholm and Franco Bazzini  each scored as well for the Crimson and Gray.

Leah Beauton netted a goal in each half to power Women's Soccer to a 4-0 shutout of visiting Rhode Island College in a non-conference contest played on Saturday at Alumni Stadium.  The Engineers, slotted fifth in the most recent United Soccer Coaches New England top ten, improves to 5-1 this fall. Beauton put the hosts ahead in the 12th minute when a series of quick passes by Sofia Orrico and Elizabeth Rocco sent her in along on the goalie and she converted the breakaway opportunity.

Colleen Mullins hit a blistering .533 and Catherine Reynolds doled out a match-best 24 assists as WPI defeated visiting Elms 3-0 in a non-conference volleyball match played on Tuesday evening inside Harrington Auditorium.  The hosts took the match by set scores of 25-11, 25-22 and 25-14. After a back-and-forth start to set one that saw the two teams tied 3-3, WPI rattled off 21 of the next 25 points to take a commanding 24-7 advantage.  The Engineers hit a jaw-dropping .458, registering 11 kills and not making an error in 24 attacks.

Women’s Soccer is the only team at home this week, hosting Clark Saturday at 1pm.  That doesn’t mean Saturday isn’t a busy day for WPI Athletics.  Football heads to Husson, Cross Country takes part in the UMass Dartmouth Invitational, Field Hockey travels to Wellesley, Men’s Soccer ventures to Babson and Volleyball is at Springfield. 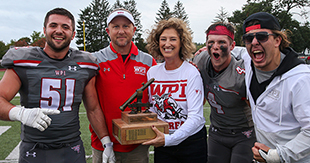 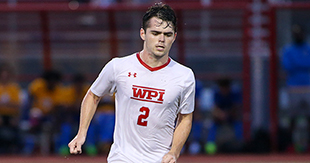 Schedule and Results | Roster | Stats | News
9/11 - All Tied Up! Men's Soccer Draws with No. 25 Brandeis
9/14 - Conroy and Lapointe Account for Half of Men’s Soccer’s Goals in Blanking of Mass Maritime 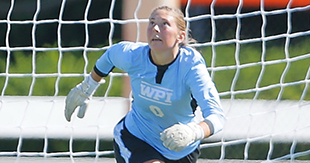 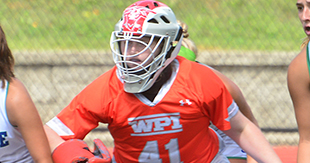 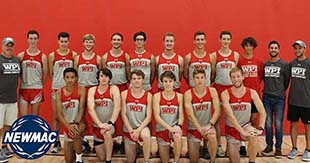 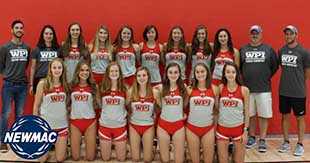 Schedule and Results | Roster | News
Back in action on Saturday, September 21st at the UMass Dartmouth Invitational