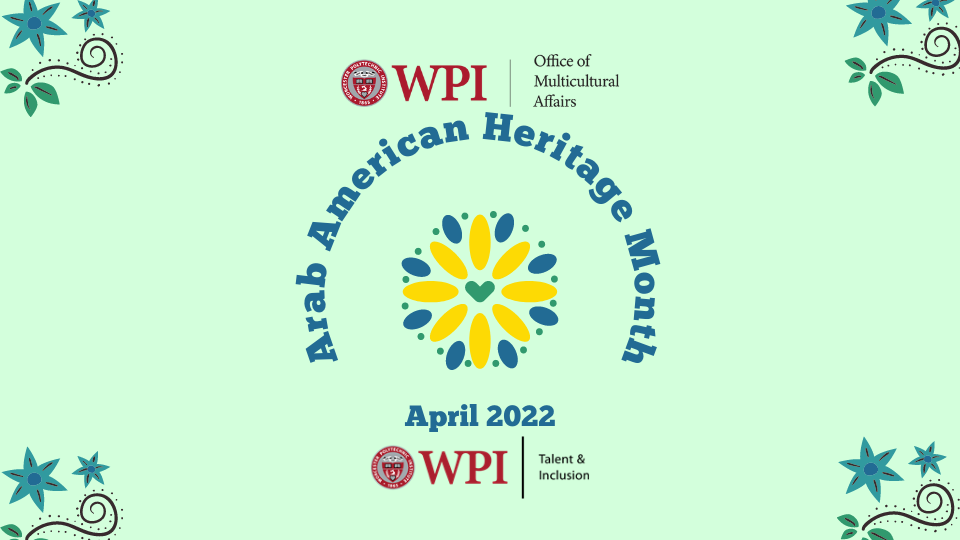 Worcester Polytechnic Institute (WPI) celebrates Arab American Heritage Month 2022 by honoring and highlighting the diverse culture, heritage, and contributions of the Arab American community throughout history. We encourage our community to study, observe, and celebrate this community and its rich heritage. "Immigrants with origins from the Arab world have been arriving to the United States since before our country's independence and have contributed to our nation's advancements in science, business, technology, foreign policy, and national security." – U.S. Secretary of State Antony Blinken

“Celebrating the rich and diverse culture and contributions of the diverse population of Arab Americans, National Arab American Heritage Month has been observed during the month of April since 2017. An estimated 3.7 million Americans have Arab roots, according to the Arab American Institute, with ancestries traced to 22 countries in the Middle East and North Africa, including Lebanon, Syria, Egypt, Palestine, Morocco, Iraq, Jordan, Yemen, Bahrain, Tunisia, Algeria, Sudan, Qatar, Saudi Arabia, United Arab Emirates and others. The initiative for official national designation of the month was launched in 2017 by the nonprofit media and education organization Arab American Foundation and its sister organization Arab America. It began with support from a few states, but gained momentum each year. In 2019, U.S. Rep. Debbie Dingell (D-Michigan.) and Rep. Rashida Tlaib (D-Michigan), introduced a resolution to Congress to proclaim April as National Arab American Heritage Month. “It is my hope as a strong and proud Arab American in Congress that our nation can uplift our contributions in the United States by supporting Arab American Heritage Month,” Tlaib, a first-generation American, said about the resolution. The bill remains pending.”