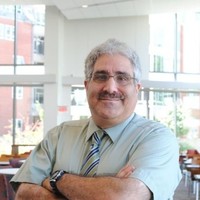 WPI and the Worcester community lost a valued friend and colleague last week when Scott Feldman, who worked for Chartwells and its predecessor DAKA for nearly 30 years, passed away Wednesday evening, March 10. He was 55.

Joe Kraskouskas, WPI’s Director of Dining Services, worked with Scott since early 1992 and remembered his colleague as “the one who would always say ‘yes, I can help with that’ no matter what. We all relied on Scotty. He never said no.”

Scott, who was most recently the supervisor at the Goat's Head, was a graduate of the Fanning Trade School and enlisted in the U.S. Army, where he served proudly as a Culinary Specialist. After his service, he began what became a 35-year professional career in food service in the Worcester area.

Scott was a constant presence not only at WPI but on several other college campuses and at organizations throughout the city. He worked with WPI, Becker College, Worcester State University, Worcester Elderly Nutrition, Camp Joslin and Clara Barton summer camps for children with diabetes, and the Worcester Tornadoes. There’s simply no telling how many college students, campers, baseball fans, and seniors were helped by Scott at some point over the last three decades.

At WPI, Scott held numerous roles and, among other things, managed the shipping and receiving of all food-related products, as well as all vending machine operations prior to the current contracts with Coke and Foley Vending. He helped Chartwells pivot to provide grab-and-go meals for students during the pandemic and was part of the team delivering meals to students at the Hampton Inn.

“Everyone leaned on Scott when they needed help,” Kraskouskas said. “And he never asked for help in return or complained about the workload.”

In his other roles over the years, Scott managed all dining operations at Worcester Tornadoes games, with up to 3,000 spectators; supervised the evening shift at Worcester State University’s four retail operations; oversaw dining services for the Leicester campus of Becker College; and was part of a team that produced up to 5,000 meals daily for Worcester’s nutrition program for the elderly. He also assisted with the catering services for the inaugurations of more than five university presidents, as well as countless alumni and reunion events.

One of Scott’s favorite roles was overseeing dining operations for the Camp Joslin and Clara Barton summer camps, which served diabetic children from 6 to 16 years of age.

“Lots of people in higher ed dining services will pick up work at camps during the slow summer months,” Kraskouskas said, “but the work is hard and the kitchens can be very hot. But Scotty loved it anyway and looked forward to it. And the kids loved him at all of his camps. He used to tell me stories about a camp on Lake Winnipesaukee where he worked early in his career, and he had such fond memories of it all these years later. He didn’t travel much but he loved his summer camps.”

Quiet and shy, but funny and open when you got to know him, Scott was described as humble, hardworking, and very kind. His work was his life, Kraskousksas said, noting that Scott’s few “guilty pleasures” included Dr. Pepper and his Ford F150s, and he adored his cats and dogs. Scott did not marry or have children but enjoyed his family and doted on his niece and nephews. After his passing, Scott’s father and siblings found many photos of his “WPI work family,” which didn’t surprise those who knew him.

“Through his varied career with Chartwells, Scott found WPI to be his favorite campus, the one he always returned to,” said Kraskouskas. “He was a very generous and honest person and was well liked by all of us. We’re going to miss him terribly. The entire community will. ”

Services were held Sunday, March 14. Scott’s obituary noted that memorial contributions could be made to the World Central Kitchen; it seems fitting that feeding people will be a central part of his legacy.