WPI’s Culture of Philanthropy at work Beyond our Two Towers

“Create, discover, and convey knowledge for the betterment of society.” When WPI founder John Boynton issued this directive for the university, could he have fathomed the positive impact WPI alumni would 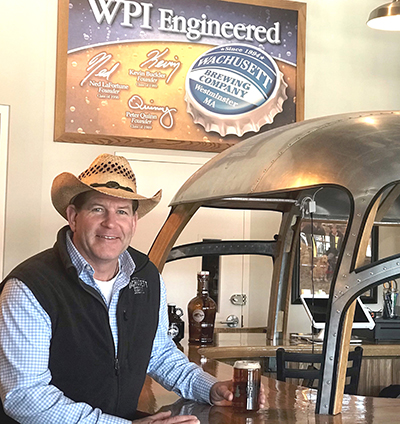 have in the world over the next 160 years? Edward “Ned” LaFortune III ’90 is one of countless members of the WPI community who answered Boynton’s call to use a WPI education to improve the human condition.

“Wachusett exists today because of volunteer efforts of family and friends of the brewery in the 90’s.  We could not afford to pay for bottling or special event labor in the early days.  This goodwill impressed upon us the impact of giving back.  Wachusett has supported virtually every North Central Massachusetts charity possible over the past 26 years and COVID-19 has simply expanded our mindset on giving back.”

Wachusett Brewing Company has used 100 percent of the proceeds from the sales of special brew six packs to support its community in meaningful and impactful ways. In January 2020 the brewery partnered with other local breweries to develop “Worcester’s Bravest.”  The profits of this specially made charitable brew went to relief funds for the families of fallen Worcester firefighters. And a few months later, LaFortune was at it again with his highly rated IPA named “Glory.” The patriotic themed brew was initially slated for release in summer 2020, but as the pandemic surged into spring, LaFortune moved up the distribution date to keep his team employed, serve his customers, and once again generate charitable financial support for his community. Proceeds from the sales of “Glory” six packs are going to regional United Way COVID-19 relief efforts.

Gratitude goes out to LaFortune for using his WPI education to make an impact beyond WPI’s two towers, Boynton Hall and Washburn Shops, which symbolize the university’s commitment to theory and practice. You can visit Wachusett Brewing Company in the Canal District’s new Worcester Public Market, in Harvard Square and at their original brewery and Brew Yard location in Westminster, Mass.