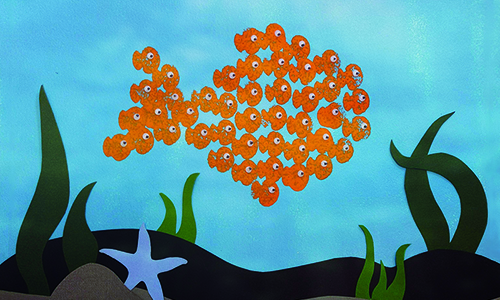 Have you seen a school of fish swarming in the sea? That school, made up of hundreds or thousands of fish, have no leader, even though they swim at the same speed, and turn and dive in unison. How fish swim in unison, without a leader to direct them, is actually related to how animal and human bodies work, with cells, muscles and organs working in unison to keep the body alive and in motion. This is the focus of research being conducted at Worcester Polytechnic Institute by Dr. Kun-Ta Wu, assistant professor of physics.

To study this, Wu and his team are looking at the collective dynamics of active matter. Active matter differs from conventional passive matter because of its ability to convert chemical energy into kinetic energy. Examples of active matter range from living things, like bacteria, ants and locusts, to non-living things like colloidal rollers, magnetic spinners, and motor-driven cytoskeletal filaments. Each one can self-propel, while interacting with its neighbors. On a large scale, these entities self-organize into a macroscopic material flow, meaning they begin working in unison, and that unified effort can be directed to transport cargos or perform mechanical work. However, how the interaction among entities impacts the resulting macroscopic dynamics remains poorly understood.

Wu’s team recently published a paper, “Collective Dynamics of Microtubule-Based 3D Active Fluids from Single Microtubules,” in the peer-reviewed journal Soft Matter. In the paper, Wu describes how his team used microtubule-based active fluids driven by different kinds of kinesin motor proteins. In Wu’s laboratory, microtubules were extracted from bovine brain tissue. In cells, microtubules play an important role in cell activity, being used in cell division and nutrient transport. The activity originates from kinesin molecular motors walking along microtubules. In cargo transport, microtubules are like rail tracks and the kinesin motors are like trains. When these tracks and trains are added in water, their motion drives surrounding water, generating turbulence-like flows.

Wu investigated how the flow speed was impacted by mechanisms of molecular motors. They used two different motors in their research. Processive motors walked along microtubules continuously without detaching, while non-processive motors detached after each step. Unexpectedly, they found that when the system was supplied with sufficient fuel, such as adenosine triphosphate, the flow speed increased with the motor output power but is independent of motor processivity. This finding demonstrated that the accumulated dynamics of the active fluids was mainly related to the activity of each entity, rather than their detailed power mechanisms.

On the biology perspective, this finding suggests that the motion of tissues mainly depends on the accumulated forces from each cell, and how cells generate such a force may be an intracellular process, which does not impact the tissue motion significantly. However, living organisms contain complex and diverse biological processes; outlining the underlying physical principles governing these processes remains an unfinished challenge in biophysics. Wu will continue to adopt experimental model systems of active matter to strip layers of complexity in life to find out the principles of how life works and further shed light on unraveling the mystery of the origin of life.

Wu's Team Publishes in soft matter on research into how life works at: https://pubs.rsc.org/en/content/articlelanding/2019/SM/C9SM00123A#!divAbstract