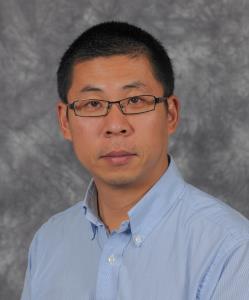 Yu Zhong, associate professor of mechanical engineering, has received a two-year, $499,993 grant from the Department of Energy (DOE) for his research project, “Computationally guided design of multiple impurities tolerant electrode.”

Zhong is working to greatly increasing the lifetime of stationary solid-oxide fuel cells, which the DOE describes as “an energy user's dream” since they are efficient, combustion-less, and virtually pollution-free power sources. These fuel cells, which convert chemical energy from a fuel, like hydrogen or methane, into electricity via a series of electrochemical reactions, are largely used for power generation by data centers, the military, and large businesses, as well as by hospitals, schools, and power plants. They are different from the smaller fuel cells designed for powering cars and trucks.

Zhong’s research is aimed at doubling or tripling the life of these fuel cells by developing a new cathode material that is resistant to degradation by airborne chemicals, including carbon dioxide, sulfur dioxide, and water. In a solid-oxide fuel cell, the cathode reduces oxygen molecules from the air into oxygen ions, which travel through the solid electrolyte to the anode to oxidize the fuel and produce electricity. Since the cathode is in constant contact with the air, it is vulnerable to chemical reactions that can chemically degrade it, resulting in a drop in the fuel cell’s power output and a sharp reduction in its lifespan.

According to Zhong, the DOE wants stationary fuel cells to last more than 20 years, but their lifespan is often much shorter – often only a few years long.

Zhong will use computational tools to design a new cathode material that has good electrical performance, including high energy density and power output, but that will also be highly resistant to degradation caused by airborne impurities. The goal is to be able to increase the lifespan of solid-oxide fuel cells to meet the DOE’s goal.