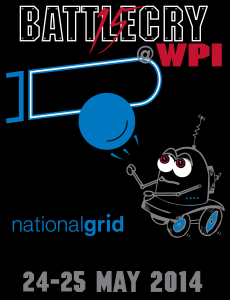 Now in its 15th year, this weekend’s “BattleCry@WPI” robotics tournament is bigger and better than ever!  The BattleCry staff has been working hard to make this as excellent an experience for the audience as it is for the competitors; they invite you and your families to attend.

This has become one of the largest and most popular robot tournaments in the nation.  Over 1000 team members representing over 60 high schools from 7 states will be competing with their 130-pound robots.  The competition is based on the 2015 FIRST (For Inspiration and Recognition of Science and Technology) competition rules (“Aerial Assist”).

The game is played on a 54 by 25 foot field set up in Harrington with robot “alliances” attempting to out-score each other by passing 2ft diameter exercise balls between each other and eventually into goals.  Robots will be using both sophisticated (vision-enabled) autonomous and remote-controlled operations.

Teams in attendance are mentored by colleges/universities such as Northeastern, BU, UNH, Daniel Webster, Boston College, and, of course, WPI, as well as industry giants such as EMC, Raytheon, NYPRO, BAE Systems, GE, UTC, TI, Boeing, and dozens of others. 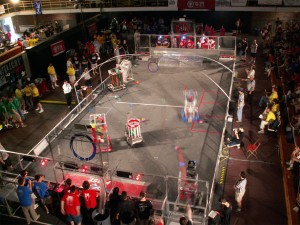 The event is a celebration of engineering innovation, teamwork, and spirit that combines NBA-type action with rock concert ambience, and is made possible through the enlightened sponsorship of NationalGRID.  With two 3-robot alliances entering the field every 7 minutes, it is continuous excitement for all ages.  Spectator admission is free!

Saturday qualifying matches go from 1000-1900; Sunday events start at 0900, culminating in the exciting elimination matches that continue until 1730.  For more information on the schedule and the event please go to www.wpi.edu/+battlecry.