Why giving is still crucial 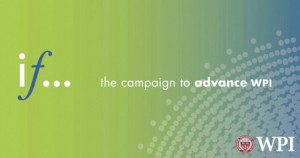 The fact that faculty and staff members have given more than $800,000 to If . . The Campaign to Advance WPI speaks volumes, says Jo-Ann Alessandrini, associate vice president for university advancement and the campaign’s director.

“Our faculty and staff are here every day,” she notes. “The fact that so many give generously, above and beyond, says something. They believe in our students and the university.”

Much credit for the campaign’s success goes to WPI’s trustees whose leadership and generosity raised the bar for philanthropy at WPI,” Alessandrini says.  “The $200-million campaign — the most ambitious in the school’s history — has exceeded its goal and now stands at $202 million.

However, with some priorities still lagging in dollars raised, giving is still important with a year in the campaign remaining.

Now, the effort turns to funding facilities, academic and faculty program support, and unrestricted funds, Alessandrini says, three of the four focus areas of the campaign, which was publicly launched in May 2012 with $112 million already raised. The most challenging area, she says, is raising money for the unrestricted funds, which will help WPI take advantage of emerging opportunities.

“People increasingly prefer to restrict their contributions,” she said. “They want to know their dollars will support a specific area.” However, unrestricted funds are vital to helping universities meet unexpected priorities that would remain otherwise unfunded. 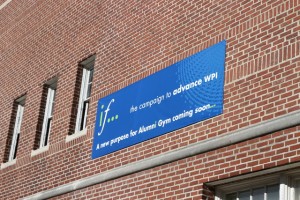 Unrestricted contributions allow the university to move forward, Alessandrini explains, by offering WPI the ability to be agile and seize opportunities when time is of the essence. It could be a time-sensitive, special project with great educational and institutional value here or abroad — or a campus renovation that must be addressed quickly.

In campus facilities and development, alumni and friends have been generous in many areas: East Hall, the Sports and Recreation Center, the Fire Protection Engineering Labs at 50 Prescott Street, and the George I. Alden Life Sciences and Bioengineering Education Center have all been funded, all or in part, through gifts from the current campaign. A major focus in this final year is raising funds to renovate Alumni Gym into a hub for WPI’s distinctive project-based undergraduate curriculum. Alumni, faculty, and staff are participating in an online fundraising effort for Alumni Gym, aiming to raising 12 to 15 million dollars in some friendly cyber-competition between classes, fraternities/sororities, and affinity groups.

Slightly surpassing the $200 million dollar goal involved 19,000 donors in all, Alessandrini said, most of whom are alumni, at 62 percent. Foundations and corporations — which often view WPI as an economic driver and place to find talent or research capability — have contributed about 7 percent of the dollars raised.

In May, Bob Foisie ’56, made the largest individual gift in WPI’s history toward the campaign. As part of his past philanthropic legacy, Foisie’s scholarships provided support to about 580 students. His latest $40 million commitment will raise his all-time support to his alma mater to more than $63 million.

Alessandrini sees this final year of the campaign as building on momentum and strengthening WPI’s overall philanthropic culture. “The engagement process begins before our students arrive on campus,” she says about fostering the importance of giving back, “and continues through their transition to becoming alumni. Our goal is to have relevance and meaning in each graduate’s life through each generation.”

Bill McAvoy, vice president for university advancement, expects the last year of fundraising, with President Laurie Leshin now on board, to be a momentous one, as well.

“Excitement is building toward WPI’s Sesquicentennial Celebration next year,” McAvoy adds. “Another positive indicator is the economy. We started the campaign in 2008 in the midst of a down economy. Today, the financial outlook is stronger.”