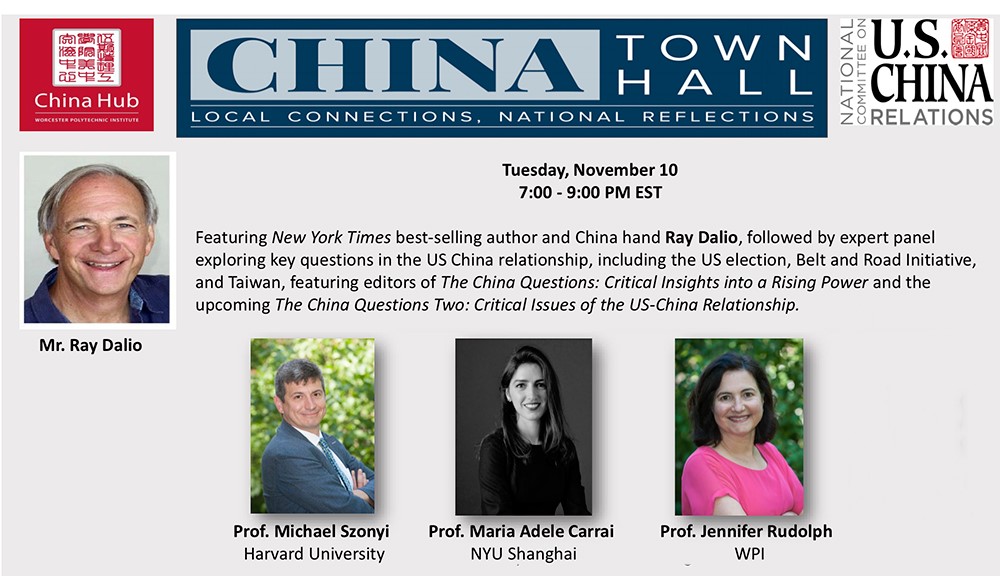 The U.S. should be encouraging international students, including Chinese students, to study in the U.S., says WPI expert in modern Chinese political history

We should once again expand opportunities for higher education in the United States for foreign students, including those from China, and encourage them to come to the U.S., according to WPI Professor Jennifer Rudolph, an expert on modern Chinese political history.

Rudolph, who teaches Asian history and international and global studies and is director of WPI’s China Hub, recently hosted the annual CHINA Town Hall, a joint program sponsored by the National Committee on U.S. China Relations (NCUSCR) and select local hosts like WPI.

The national portion of the event, held via Zoom, featured NCUSCR president Stephen Orlins interviewing renowned investor Ray Dalio, New York Times bestselling author and founder of Bridgewater Associates, the world’s largest hedge fund. Dalio has been involved with China through business and philanthropy for 35 years and has keen insights into its economy and functioning.  After a question-and-answer session with Dalio, the WPI program commenced, also via Zoom, with brief talks focusing on critical aspects of the U.S.-China relationship.

Rudolph discussed tensions in the Taiwan Strait; Professor Maria Adele Carrai of NYU Shanghai presented on the alternative to the U.S. development model China presents to Africa; and Professor Michael Szonyi of Harvard—originally slotted to discuss the U.S. election—instead countered Dalio’s perspective of the state of U.S.-China relations as transaction-based, profit-motivated, and values-free. A lively discussion based on student questions ensued, with a number of questions focused on Chinese students in the U.S.

U.S. openness is a key strength in STEM higher ed

During the Q&A panel, Rudolph noted that the U.S. must maintain its leadership in higher education, pointing out that the openness of the U.S. system constitutes one of its major strengths. She also said that bringing in international students contributes to the vitality of thought and innovation on campuses. This is especially the case in STEM fields, as the number of U.S. STEM students is insufficient to support the country’s vibrant tech-based industries. Students from China play a big part in populating our tech ecosystem, she said—in 2020, more international first-year students in the U.S. came from China than from any other country. Many of them, both undergraduate and graduate, end up contributing to U.S. businesses and STEM-based initiatives after graduation. 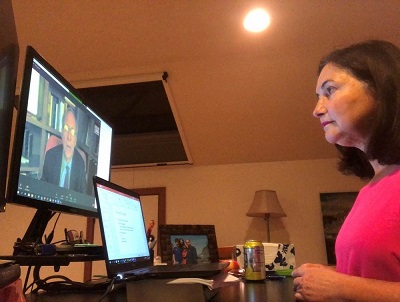 Professor Jennifer Rudolph listens to Ray Dalio being interviewed by Stephen Orlins, the president of the National Committee of US China Relations.

Szonyi pointed out that it is often assumed that the numbers of STEM graduates are equitably distributed between the two countries, but China has five times more STEM students than the U.S., he said.  “If America closes off, the U.S. loses the tech war,” Szonyi said. “It is self-defeating.”

International students also contribute a significant portion of higher education institutions’ revenue flow, Rudolph said, pointing out that many tuition-dependent universities have become accustomed to the revenue brought in by international student tuition.

The U.S. relationship with China is the single most important bilateral relationship in the world today, Rudolph continued. China is the main trading partner of the U.S. and its largest geopolitical rival, making understanding China’s political and cultural history and current circumstances critical to solving the world’s great problems. Those problems include creating stability in the Asia-Pacific region, fighting climate change, ensuring food security, and stemming nuclear proliferation.

To increase understanding of China, Rudolph and Szonyi co-edited, The China Questions: Critical Insights into a Rising Power (Harvard University Press, 2018), which presents a series of questions answered in op-ed style by top China experts in accessible prose for a general audience. Now, along with Carrai, they are working to further increase Americans’ understanding of the U.S.-China relationship with their current project, The China Questions II: Critical Issues of the US-China Relationship, slated for publication early next year.

• Is the U.S. losing Chinese and other international students to the UK or other countries?

• Why does it matter if international students in general, and Chinese students specifically, come to U.S. universities?

The U.S. higher education system is the envy of the world. Its strength comes at least in part from attracting top students from all over the globe who bring diverse perspectives and experiences and strong academic credentials. Without international students, U.S. academic communities lose both vibrancy and currency (and not the financial kind). The flip side of this is that the higher education system in China has rapidly expanded and strengthened since 1999. Many Chinese universities now offer programs and degrees comparable to their counterparts in the U.S., Europe, and Australia. Thus, Chinese students don’t have to go to the expense of earning a foreign degree; they can get an excellent education for a fraction of the cost at home. Tsinghua University and Peking University, for instance, are ranked by multiple sources as in the top 25 universities in the world.

• What roles do the China Hub and The Global School have in the educational and political rapport of the two countries?

The China Hub and The Global School contribute to WPI’s efforts to foster collaborative education and research with global partners, especially in tackling the world’s great problems such as the future of work or urban sustainability. The China Hub has facilitated the establishment of four project centers in China, the creation of an exchange program with Tsinghua University and joint programs with Chinese university partners. In addition, the China Hub has facilitated research collaboration on global public safety with the establishment of the Center for Global Public Safety at Tsinghua.

Moreover, the China Hub brings China to campus. It sponsors visiting scholar research on campus, and on the student side, has established a curriculum focused on China on campus, including classes on Chinese language, history, culture, and society. Undergraduate students can integrate study of China throughout their four years on campus through China content in GPS, completion of the HUA requirement, their IQP, and their MQP, as well as earning a minor in Chinese Studies. These efforts, both on campus and off campus with our Chinese university partners, create opportunities for informal diplomacy that enhances cross-cultural understanding and helps WPI students achieve global competency and global preparation. The Global School will extend this sort of applied educational approach to the graduate level, enabling new collaborations with our partners in China and new opportunities for our students.

The Global School was established at WPI earlier this year to prepare students to meet the global STEM-related challenges facing the world. The need for potable water, reliable food supplies, clean energy, and a healthy and stable environment—all part of the core mission that drives The Global School—requires STEM professionals with an international perspective who also understand needs at the local level.

WPI’s China Hub, established in 2013, contributes to WPI’s competitiveness in global engagement and partnership, promoting mutual understanding between students from the U.S. and China.

The Interactive Qualifying Projects and Major Qualifying Projects conducted at WPI’s four China-based project centers are unique and distinctive to the region and are developed in collaboration with Chinese sponsors and partners—students and faculty are regarded as highly prepared and skilled problem solvers, according to Rudolph.