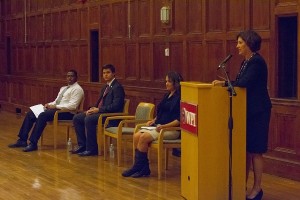 Last Thursday evening, nearly 200 students, faculty, and staff gathered in Alden Memorial for what is expected to be the first of a series of conversations on race, diversity, and inclusion on campus. This event followed a Nov. 12 gathering of students of color, joined by staff and faculty dressed in black in a show of solidarity with campuses around the nation that are undergoing racial strife.

“The issue of persistent racism is making headlines, and we’re not immune to it,” Walker said. “These conversations are necessary, even if they’re uncomfortable.”

I am here to listen and engage. Not just tonight, but always.
President Laurie Leshin

During Thursday’s gathering, Leshin spoke about measures being taken on the WPI campus to increase diversity and cultural awareness, and pledged to continue ongoing efforts to eliminate racism for the benefit of the entire WPI community. She also spoke of her anger over a racist message posted on the anonymous social media site Snapchat after the Nov. 12 demonstration on the Quad.

“These conversations will lead to more things that we can do,” she said. “I was appalled and angry over this racist posting. We will not tolerate racism on this campus.” 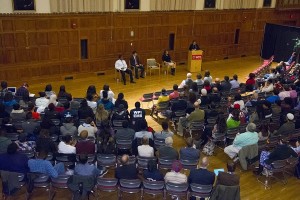 She said that Snapchat has not cooperated in the administration’s efforts to identify the poster, and urged students to come forward if they have information. “If we find out who did that, we will bring justice.”

During the two-and-a-half-hour program, several students shared stories of experiences and attitudes that they’d faced that made them acutely aware of how people judge and perceive them by their race rather than their qualities.

A recurring theme in the conversation was the desire for the university to recruit even more students and faculty of color, and for greater cultural awareness for staff, faculty, students, and police.

Leshin listed a number of initiatives both under way and slated for the near future to make the campus a more diverse and tolerant community. Among them:

“Tonight is about listening to each other,” Leshin said. “To become a diverse community. That’s the long term goal. I am here to listen and engage. Not just tonight, but always.”