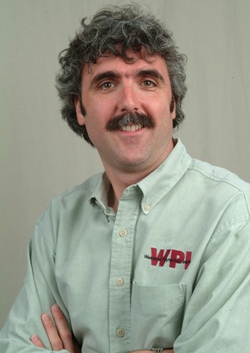 In 2006, then-reputed South Boston mobster James "Whitey" Bulger was more than a decade in hiding. During that time, a photo of Bulger and his girlfriend, Catherine Greig, was reported to have surfaced. But the quality of the photos were so poor that authorities could not discern the individuals' identities.

At that point, Fiene had been volunteering his time with state and local police for several years, enhancing video, audio and photographs of suspected criminals. When Fiene received the images from State Police, he used the latest cutting-edge technology at WPI to enhance the images and produce photos of Bulger and Greig that ultimately appeared on Wanted posters worldwide.

When Bulger was convicted on Aug. 12 on 31 of 32 counts – including racketeering, extortion, money laundering, drug dealing and weapons possession – Fiene was pleased to know that he played a part in bringing to justice one of the nation's most notorious criminals. As Fiene told the Telegram & Gazette on Aug. 26, it was "exciting to see (the case) come to fruition."

Fiene’s feat also attracted the attention of TV station NECN, which aired a lengthy story about Fiene and his efforts in the Bulger case.

Fiene told NECN that he enjoys volunteering his forensic video skills to make the community safer.

"When I get those big cases I do love dropping what I'm doing and working on those cases," Fiene told NECN. "It is great to get real criminals off the street."