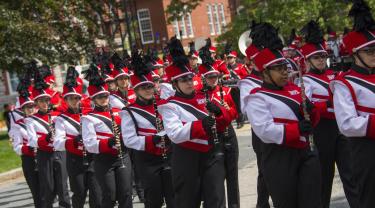 They’re the ones who soundtrack home and away games for WPI’s sports teams.

They’re nationally recognized for their talent and are regularly recruited to perform for other colleges and universities.

They’re WPI’s Pep Band, and they’re here to put some pep in your step. 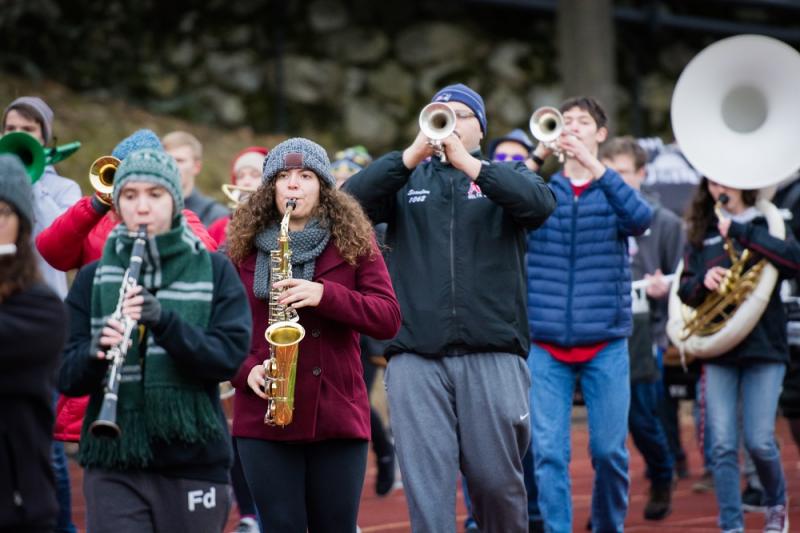 In addition to cheering on WPI’s teams with their music, the Pep Band has performed for several other schools, including Boston College, Worcester State University, College of the Holy Cross, and even Tulane University in New Orleans.

“We’re still not entirely sure how a school from Louisiana heard about our band,” says drum major Clifford Smith ’19, “but it was one of the most honoring experiences of the band’s career.”

With an elevator pitch that describes the band as “a spirited bunch” offering its members “friendship, pizza, movie nights, parties, and, most important, good music,” it’s clear that they’re one big musical family, which is exactly why many of their members wanted to participate.

The band’s president, Veronica Rivera ’18, joined WPI’s Pep Band after being a member of her high school’s marching band for four years. “I decided to join the Pep Band specifically because in high school, marching band was one big family because we spent so much time together, and I wanted to have that again in college,” she explains. “It was great to be able to move in [to WPI] early and already start the school year with a group of people I could hang out with and … were more than willing to help me.”

Check out the pep band's 2017 field show, featuring performances of Fall Out Boy's "Thnks fr th Mmrs," "I Don't Care," and "My Songs Know What You Did In The Dark."

Smith and assistant drum major Ethan Lauer ‘20 have an extensive history with marching band, having also participated in high school. “Marching band had an incredible impact on my life, and I knew I wanted to continue to march in college,” Lauer says. “When I found out WPI had a band, I signed up right away.”

While the Pep Band prides itself on fun and inclusivity, one of the things Rivera, Smith, and Lauer stress is that being a band member also requires a lot of work and practice; a glimpse at one of their performances is more than enough to prove that.

“During the marching season, we spend 10 to 15 hours per week marching on the field and rehearsing music,” Smith says. Marching season runs from Band Camp (four days of nothing but rehearsal starting before New Student Orientation) all the way through the last sports game in B-Term. 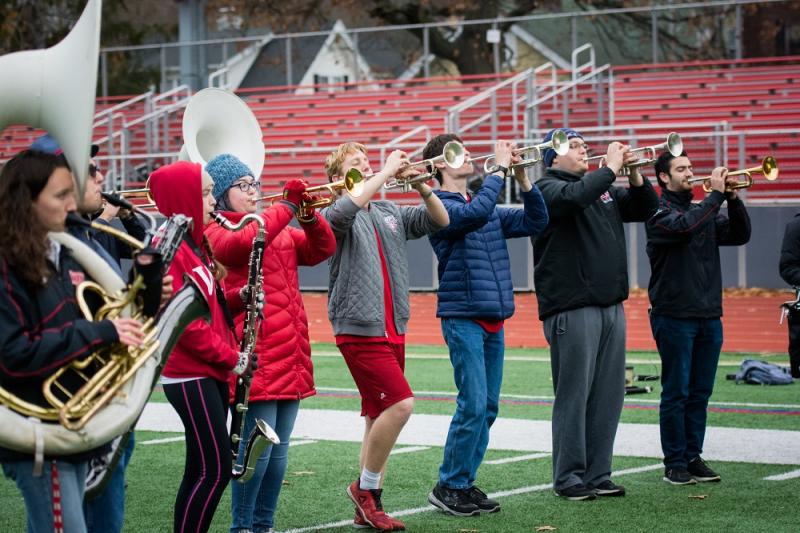 The band practices on the football field.

In addition to camaraderie, music is what’s at the heart of the Pep Band, and although their musical catalog includes Fall Out Boy, The White Stripes, Dropkick Murphys, Billy Joel, Queen, and several different takes on movie scores, Rivera, Smith, and Lauer have particular pieces they’d love to perform.

Rivera would love to play songs from the Pirates of the Caribbean soundtrack as a throwback to her days performing the songs in high school marching band.

Smith is partial to Quincy Jones’s “Soul Bossa Nova,” which he says would be great to play during basketball timeouts.

Lauer hopes to channel his inner Jedi with some pieces from Star Wars. “I’ve always loved the films, and John Williams’s soundtrack is one of the initial reasons I decided to become involved in music,” he explains.

With such a varied catalog, it can be hard to choose an overall favorite piece to perform. For the pep band, though, the decision is easy: “The Impression That I Get” by The Mighty Mighty Bosstones.

“It’s the band’s theme song,” Lauer says. “We all dance when we play it. It’s super fun and upbeat, and gets the entire band and our audience pumped.”

One listen to the popular ska song makes it clear why the song is ranked as a favorite, and effectively sums up the enthusiasm and excitement that is WPI’s Pep Band.

A group that’s full of fun, friendship, and good music—what’s not to love?