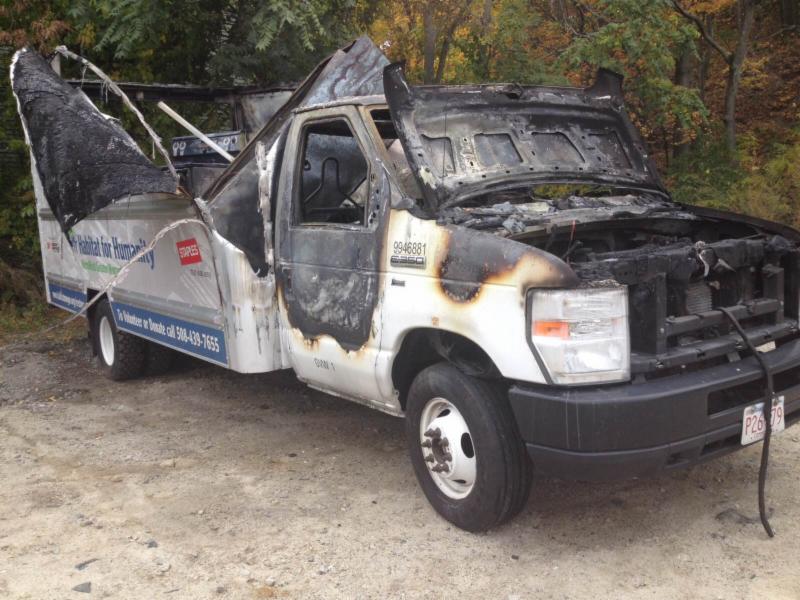 Even as members of WPI’s Habitat for Humanity chapter prepare to travel to Central Arizona in January for a weeklong build trip, they are focused on matters closer to home.

On October 23, the 16-foot box truck owned by the Habitat for Humanity-MetroWest/Greater Worcester (HFH-MWGW), the local affiliate, was torched in a senseless act of arson.

Habitat at WPI regularly holds campus fundraisers for HFH-MWGW. In response to the current situation, however, students have decided to earmark any money they raise to help pay for insurance and maintenance on a replacement truck, which has been donated by Staples and will arrive in Worcester shortly.

The affiliate needs $10,000 to support the new truck, and donations to date have raised about 20%.

Habitat is an international organization that builds homes for and with homeless families. Across the world, communities raise funds and provide labor locally, with volunteers working side-by-side with future homeowners to create sustainable and safe housing.

The truck that was destroyed is an essential part of the local affiliate’s operations. It is used for transporting materials to and from the ReStore on Distributor Road (at Goldstar Blvd.), a retail clearinghouse that sells appliances, construction materials, and other home goods to benefit HFH-MWGW.

“Having been involved with Habitat in the past, I know just how important even one of those vehicles is,” says Marissa Derderian, complex coordinator in Residential Services and advisor for the WPI chapter. “We’re trying to help out.”

The WPI chapter has about 60 members this year, says president Laura Kowalczyk ’14, and they are active participants in HFH-MWGW’s operations. Students hold build days once or twice during each term to work on homes currently being built in the area; they contribute $500 to $1,000 each time.

In the past, students have also volunteered their time by working at the ReStore; they are pushing that again now, says Derderian. In addition, they regularly hold fundraisers on campus to donate money to Habitat.

The group’s fundraisers are typically creative, adding an unusual twist to the standard tabling concept. Last year, a Sign-a-Stud campaign gave passersby who paid a dollar a chance to sign their names on a stud that then went into one of the homes being built in Central Massachusetts. “It was a way to have a piece of WPI in one of the houses,” says Kowalczyk.

Last week, students raised $105 in a Build-by-Numbers fundraiser. Again for one dollar, people could purchase a paper brick that was then pasted on the bookstore window to fill in the shape of a house. The money went straight to the truck fund.

Notes interim fundraising chair Manisha Krishnan ’16, “We’ve also been spreading the news about the truck to employees on campus, and we ask them to donate any little amount they can.” The group is also contacting local businesses about supporting Habitat.

On the Tuesday after Thanksgiving, the chapter will hold a Trivia Night at the Goat’s Head, “where we’re going to announce the story of the truck and kindly ask people for any donations that would bring us one step closer to a new truck,” Krishnan says. “Let’s hope we reach our $10,000 goal soon!”