WPI biomedical engineering professor Glenn Gaudette is back from Arizona, where he was named 2015 Outstanding Faculty of the Year by Kern Entrepreneurial Engineering Network (KEEN). Though the award seems like a perfect fit, he says he was surprised to get the email last month announcing he’d won. 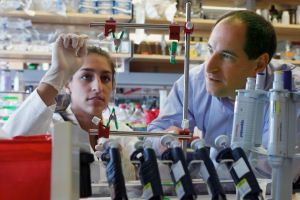 Prof. Gaudette’s with a student.

The award, engineering program, and WPI mission are all in sync.

“That’s part of the reason I was so surprised,” Gaudette says. “There is such a large number of us at WPI, such a dedicated group of faculty working on fostering the entrepreneurial mindset; I was just listed as the leader and was fortunate enough to get the award.”

Gaudette says that his belief—and the mission of WPI—is that offering technical skills to engineering students is not enough. They also need soft skills as part of their curriculum to use in society to make the world a better place. Money, he says, should not be the main goal. 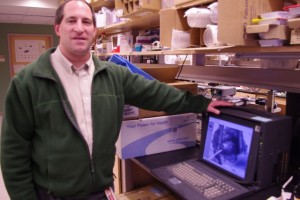 “When I was an engineering student, we did tech stuff,” Gaudette says. “But where was the opportunity to develop a new product? We’d work on getting a program to work faster or add steel to carry more load, but what about thinking of a new way to support that load?”

An example he uses to demonstrate the difference an entrepreneurial mindset can make is coffee cups—specifically, to-go cups from Starbucks, Dunkin’ Donuts, and other coffee shops. Considerations are made concerning how many different types of cups need to be produced, what kind of liquids they’ll hold, and supply chain accessibility. But Starbucks wanted to help the planet and uses recycled materials, “which wasn’t easy years ago,” Gaudette says. “They had to think about ‘are there enough suppliers?’ among other factors,” he says. The end result was not just customers buying coffee and Starbucks making money, it was customers buying coffee from a business they could feel good about; cup designers could be proud that they took on those design challenges for a greater good.

That pride is of value, says Gaudette, and is the end result of an entrepreneurial, or more curious, mindset. There is a pre-conceived notion that “value” always means making money, he says. “But that value is to society,” he notes, and money will likely come later. “It’s part of what we do, to help students with their passion so they can work hard and be happier.”

“By injecting this spirit into the school through the KEEN programs, Glenn is helping create a new generation of WPI graduates with even more appropriate tools and skills,” says Roman Gutierrez, who earned his undergraduate degree in biomedical engineering last year, and is now pursuing a graduate degree at WPI’s business school.

The university’s IQP program illustrates what entrepreneurship and making a difference is all about, says Gaudette. These global projects don’t revolve around money, but in finding solutions and creating value for society. He used the example of interdisciplinary and global studies professor Scott Jiusto, who just returned from Cape Town, South Africa, with a group who educated residents there about how to improve restroom sanitation, and reduce the spread of disease.