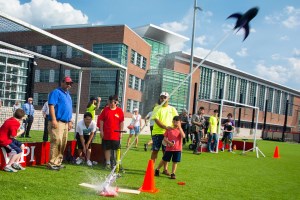 A team from the Frederick W. Hartnett Middle School in Blackstone, Mass., won the 2015 Goddard Cup water rocket competition at Worcester Polytechnic Institute (WPI) by landing its 2-liter bottle rocket within nine-tenths a meter of the target, the closest of the 13 teams to compete.

Tahanto Team 4 and Tahanto Team 3 took second and third places, respectively, landing their rockets 1.8 and 2.6 meters from the target. The event took place in partly sunny, breezy conditions on the playing fields that top the WPI's Park Avenue parking garage.

This year’s competition attracted a total of 50 students from eight schools, some of which entered more than one team. The students and their teacher advisors designed and built rockets from pop bottles, using pressurized water to provide propulsion. Each team got three shots at landing its 2-liter water rocket in a Hula Hoop situated 30 meters away. The Goddard Cup took place during the NASA-WPI Centennial Challenge at WPI prior to the university's Fourth Annual TouchTomorrow Festival. 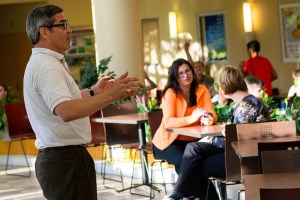 NASA's Sam Ortega talks to the teams following
the competition

During the presentation of awards, Sam Ortega, program manager for NASA's Centennial Challenges, shared some advice he learned in nearly 10 years in the space shuttle program.

“You may have heard that they often say at NASA, ‘Failure is not an option.’ The other part of that is that failure is a requirement. You have got to go out and try crazy things, to push your limits to find out what makes it better, and what makes it worse.

“The difference between engineering and just messing around is writing it down, and that’s the key. How do you know why it did well and what you did? You document and try things. If you don’t write it all down, that failure you had that you’re supposed to learn from? You didn’t learn from it. You have to do that documentation. Make it science … make it engineering, instead of just messing around.” 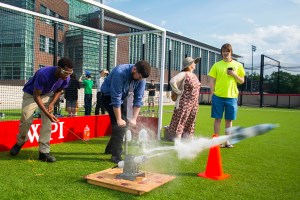 The entries use 'liquid fuel' like the rockets
designed by Robert H. Goddard, WPI Class
of 1908

The event pays homage to WPI alumnus Robert H. Goddard (Class of 1908), who is considered by many to be the father of modern rocketry. Goddard launched the world's first liquid fuel rocket on March 16, 1926. To honor his achievement, the participants use "liquid fuel" as well. Whereas Robert Goddard used a combustible fuel—for safety purposes, WPI chooses noncombustible water.

WPI invited all schools in Worcester County, kindergarten through college, to send teams of students to this event. Each team must include a member of their school's faculty to serve as team leader.