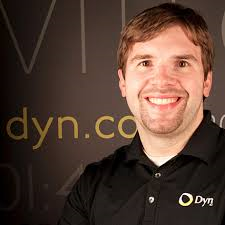 Jeremy Hitchcock ’04, this year’s WPI Innovator of the Year, will be honored at a ceremony open to the WPI community on Thursday, Nov. 5, in Alden Memorial at 5 p.m.

Hitchcock cofounded Dynamic Network Services (Dyn), the leading online traffic management and Internet performance provider for corporations from Twitter to Hershey, while a WPI undergrad. As the company grew in size and influence, Hitchcock expanded his own personal role in supporting STEM education and innovation efforts by giving time and money and remaining involved at WPI.

This year’s award marks the fifth annual honoring of an individual—either alumnus or friend of the university—who has achieved important accomplishments, but also uses innovation to push the boundaries of possibility in their industries.

The finalists for the Innovator award include people who are “really pushing their industries and fields forward,” says Judith Jaeger, executive director of advancement events and communications in the University Advancement division. “They are making critical advances in their fields.”

If you use the Internet, you’ve probably felt Dyn’s influence. The Manchester, N.H.-based company helps companies optimize their web space. That means their customers’ online properties operate smoothly, work as they are supposed to, and don’t break down. An average user will experience the effects of Dyn’s innovation when they have a reliable and user-friendly online experience across various industries.

Hitchcock’s longtime financial and professional support of WPI is influential and transformative, says Soussan Djamasbi, director and founder of WPI’s User Experience and Decision Making (UXDM) Research Laboratory and associate professor of management information systems in the School of Business. Hitchcock provided start-up funding for the UXDM lab and his support also made possible two popular user experience classes she teaches. This year also marks the first time a PhD candidate is in the UXDM lab.

“Before Jeremy, I was a researcher and what I could do was engage one or two students,” Djamasbi says. “With Jeremy’s support, three years later I will showcase nine brand new projects just since August, that involve 18 students.” This year marks the third year she will teach a graduate-level class in user experience applications and in each of those years students have taken an idea and had it published at an international conference, she says. “I tell my students this class is here because Jeremy gave us the funds to do this.”

And while many outside the WPI community might not instantly recognize the Innovator of the Year recipients’ names, it’s likely they depend on the end result of their innovation each and every day.

“A lot of the people we have chosen work in the background,” says Jaeger. “They may not work on the things we notice every day, but they work on a lot of the things we use every day.” Past Innovator of the Year award recipients include Mark O’Neil ’80, president and CEO of Dealertrack Technologies; Robert Diamond ’56, co-founder and CEO of Xeleum Lighting and a holder of a caller ID engineering patent; David Norton ’62, co-creator of The Balanced Scorecard; and serial entrepreneur Jim Baum ’86.

As a WPI undergrad, Hitchcock and some fellow students wanted to eliminate the trip across campus they often had to make to retrieve a printed paper, says Jaeger. Figuring out how to help two computers talk so a paper could be printed at the closest printer became such a sought-after service that a nominal fee was implemented. Before long, $40,000 in seed money was raised and the foundation of a game-changing company started.

INSPIRATION FOR THE COMMUNITY

“The Innovator of the Year award is a great way to honor the accomplishments and contributions of alumni and friends of WPI. It serves as a point of inspiration for the community,” says Jaeger. “Students can see where a WPI education can take them and how they can serve the greater good. It’s a point of pride for faculty, students, and staff, and these alumni serve as role models.”

Dyn supports WPI with funds, but also hires WPI grads as employees and as interns, and will sponsor MQP and IQP teams as well, says Jaeger. Hitchcock and his wife, Liz ’02, are very active alumni, visiting campus often for various events. “They are very much part of the fabric of WPI,” says Jaeger.

Djamasbi, who says she wanted to make a visual demonstration of how Hitchcock’s gift touched so many people, will have her students will wear matching T-shirts to Hitchcock’s community address so he can see how many students he has impacted. She says it’s important to be innovative, but Hitchcock also fosters innovation and gives it the chance to grow.

“He is demonstrating giving back and paying it forward and that’s a very important message,” she says. “This is a clear demonstration of how a person can give back and inspire other people.”