You might have noticed the WPI Police Department's newest member. Bella, the friendly, purebred black Labrador, is as sweet as she looks and razor-sharp smart. And while she might greet everyone she comes in contact with, her job isn't to be WPI's official feel-good dog.

“Her sole function is explosives detection,” says Sgt. Michael Jacobs, although everyone in the department acknowledges that she does a great job making everyone feel good anyhow.

This isn't WPI's first time using K9s, but having Bella specifically for campus use is new. The department has used State Police dogs for three years to cover well-attended, large events like TouchTomorrow, Commencement, or NASA robotics competitions. But as security concerns increase on college campuses across the country, Bella fills a need that might not have been as relevant 30 years ago.

Like the other officers, Bella reports to work on a daily schedule. She works with handler Officer Brian Lavallee, even changing out of her home collar into her official K9 collar when she's on duty.

Bella was bred and raised through the Guiding Eyes for the Blind, an organization that raises dogs to help guide people who are sight impaired or to provide assistance to autistic children. But, Jacobs explains, as the dogs go through training, they are also evaluated for other traits to determine more precisely what role the dog is best suited for.

Explosive-sniffing dogs don't have a superior ability to detect scents, but they do often have a higher motivation to do work for food rewards. When the puppy raisers see that, the dogs are noted to have abilities that would make them excellent at directed tasks like sniffing for explosives. Other dogs detect for electronic devices or even narcotics. At around 18 months, the dogs are then evaluated by state police to see if they think the dog's abilities, temperament, and overall drive would make them a good candidate for K9 work.

As an explosive-detecting dog on a college campus rather than a patrol dog trained to protect its handler, Bella is not trained to be aggressive. In fact, she is as important to community policing as she is to sweeping the campus. “When I am walking through the buildings with her, students, faculty, and staff will ask if they can pat her,” says Lavallee.

Jacobs notes that Bella gives the department a “humanizing factor.” When an officer has a cute and friendly dog, people are much more likely to stop and talk. Lavallee agrees. “The WPI officers have always been approachable,” he says, “but for a person who might have had trouble approaching before, Bella helps.” 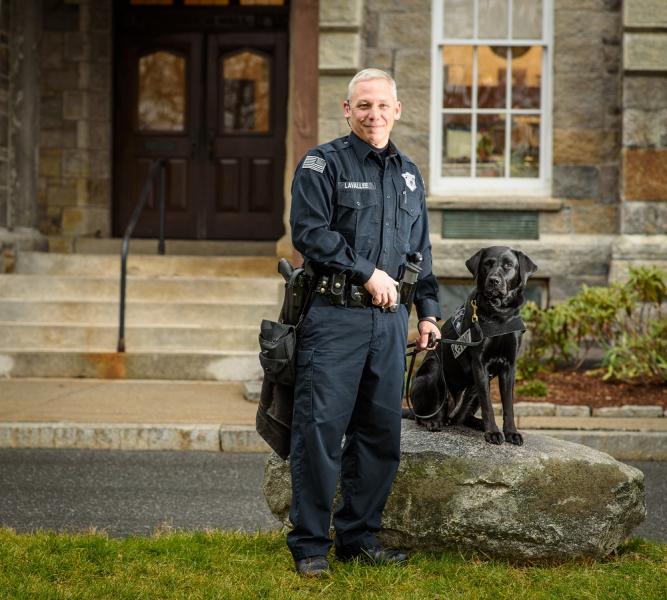 Officer Lavallee and Bella outside of Boynton Hall.

Bella is kept at a fit 53 pounds, but enjoys being rewarded for her findings with food. And because her training and bonding never stop, she is entirely hand fed from a pouch Lavallee wears on his hip. She eats four cups of food a day that way, allowing Lavallee to keep her at a healthy weight while offering her food rewards for her work.

Lavallee is Bella's sole handler, and although she gets plenty of attention from everyone else in the department, when he leaves the room, she waits for his return. Their intense bond was formed over the 16 weeks of training with the Connecticut State Police K9 Academy the two went through together this summer and early fall. Over and over, through days of training in venues as varied as train stations, buses, and various types of vehicles, Bella learned to recognize all types of explosive odors, including homemade explosives, firearms, and shell casings, having them “imprinted” into her scent-detecting system.

When Bella is off duty, she is allowed to be a normal family dog, playing with the members (human and animal) of Lavallee's family. After Lavallee changes her collar, she might know she's not on duty at WPI, but that doesn't mean she isn't always strengthening her abilities. “On her days off, the training continues,” says Lavallee, who might take her for a run or just play ball with her. As part of her training, Lavallee will hide inactive explosive training tools around his yard and have her find them. “It's all the same to her,” he says of being at work or finding things in the yard. “It's all fun to her, but it is serious business.”

“It's fascinating to watch,” Lavallee says. “She gets into the scent and moves left to right to narrow down where it is coming from.” When Bella finds what she's trained to find, her reaction calls no extra attention to her. There is no barking, no whining, no frantic digging. As an expert K9, she calmly sits at the area, points her nose to the scent when Lavallee says “show me,” and then she stares at the food pouch to get her reward.

Because Lavallee and Bella have such an intense bond, he is very tuned into her reactions and can tell there is something going on, or even if he needs to look in an unexpected area—up rather than down, for instance. And while Deputy Michael Ellsworth notes that K9s have never found an explosive at WPI, the university is always thinking about safety. “This is forward thinking and global,” he says. “We are cutting-edge.”

If Bella ever finds something suspicious, the WPI officers are trained to secure the area and will then call in the State Police Bomb Squad.

Since Bella's introduction, other universities have called the department to ask about Bella and how a K9 works on the campus.

“What the puppy raisers do with these dogs is amazing,” says Lavallee. But the work now continues at WPI. “We take our jobs very seriously to give people a safe environment to accomplish their goals. Having a dog here on campus is a tool to help give us greater security and she's a great PR tool. It shows how much we care to provide safety and security. We all take that very seriously.”