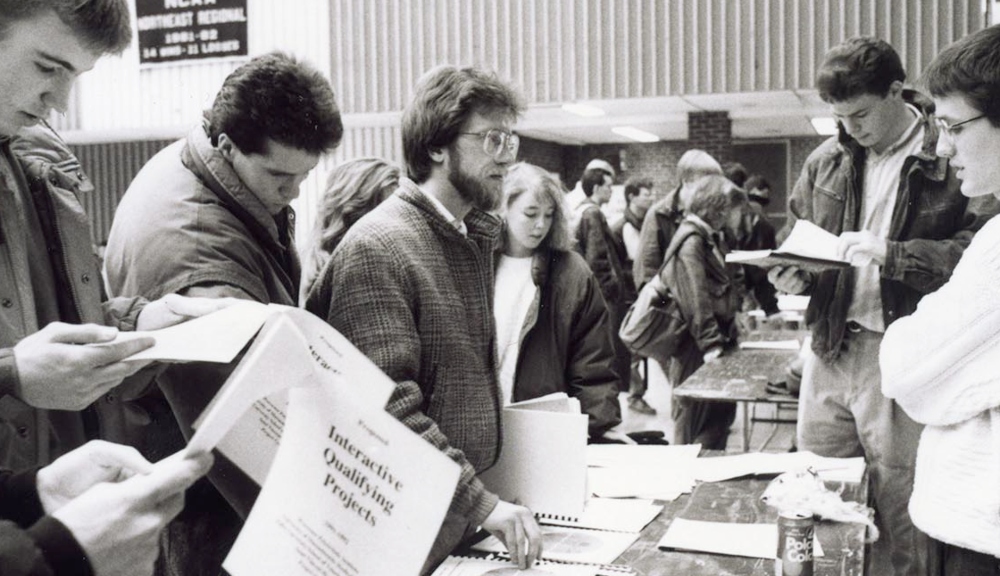 A Miracle at Worcester: The Story of The WPI Plan (Epilogue)

In the 25 years since the WPI Plan made its dramatic entrance, many have wondered how a small band of faculty members, working against the clock and with no resources other than their own ideas and dedication, were able to make it happen. In part, it was WPI -- its heritage of innovation; its loyal, dedicated faculty, passionately concerned about education; its small, cohesive and supportive community; and its financial situation, which while not dire was certainly troubling -- that made the Plan possible. It may well be true, as Seaberg believes, that it could not have happened at another institution, and, in fact, could not happen at WPI today.

But much of the credit must go to the Planning Committee itself, an extraordinarily well-matched and forward-looking group of individuals. "We were a group of strong personalities, all a bit eccentric in our own ways," Boyd says, "but there were no hidden agendas, no competition for power -- in a short time, we gained complete trust in one another, and I never knew why. We felt we had a mission, and in the process of fulfilling it we became more than the sum of our parts. It was the kind of committee activity you dream of, but which I never knew before and have never known since."

"We all cared very much about teaching, about our students and about education in general," van Alstyne says. "We were college faculty first, and department faculty second, and we had friends in all the departments. What's more, everything we proposed we felt was something that could and should be done, and having all of us, with our different backgrounds and interests, find agreement gave us impetus to continue to the end."

After the Plan was approved, the members of the committee moved on to other challenges. Roy Seaberg went on to become director of special admissions, helping expand WPI's reputation around the world. He retired this year and was honored at Reunion for his service and devotion to WPI.

Boyd, Heventhal, Moruzzi, Roadstrum, van Alstyne and Weininger returned to their lives as teachers and scholars, earning distinction as both. Romeo Moruzzi served as secretary of the faculty from 1983 until 1985, when he retired. He died in 1993. Bill Roadstrum, who retired in 1980, died in 1994.

John van Alstyne became dean of academic advising in 1971 and spent more than a decade and a half making a profound difference in the lives of hundreds of WPI students. He retired in 1987 and lives in North Carolina.

Charles Heventhal became head of the English Department and spent several years building a humanities program and organization equal to the ideal of the Sufficiency -- one that could provide students the exposure to the humanities and arts, and the writing skills, that the Plan demanded. He retired in 1990 and lives in Vermont.

Jack Boyd , who retired in 1994, divides his time between Worcester and Maine. He became one of the Plan's most passionate advocates and watchdogs, at once applying its principles to his work as a teacher and project advisor and criticizing the changes that gradually seemed to steer the Plan away from those principles.

Steve Weininger continues today as professor of chemistry. In recent years he has become actively involved as an advisor in WPI's Global Perspective Program, through which students can complete their WPI Plan projects at sites around the world.

Bill Shipman became dean of graduate studies. One of his first tasks was to head a committee that set out to revitalize the graduate program -- to create, in essence, a WPI Plan for graduate students. In the end, though, the Institute, perhaps still reeling from the dramatic change it had just undergone, was unprepared to implement its suggestions. By the time the committee's report was released, Shipman had already decided to resign to join the Cabot Corporation, where he continued his groundbreaking work in combustion. He now lives in Maine, not far from the cottage where Boyd spends his summers.

Even before the Plan vote was taken, President Hazzard asked Bill Grogan to become the first dean of undergraduate studies. In the process, he became WPI's first dean who had never been a department head. The man who David Reisman, the eminent Harvard professor of social science who served on the NSF visiting committee that evaluated the Plan, called "the Harry Truman of higher education," spent the better part of two decades managing the gargantuan task of implementing and developing the Plan, and protecting it from internal and external forces that constantly threatened it. Grogan retired in 1990. Since then, as dean emeritus, he has remained actively involved in many WPI projects (most recently, he led the committee that orchestrated the Plan's 25th anniversary celebration).

Some years back, while in Vermont to begin a trip out West, Shipman stopped for an overnight visit with Heventhal. "Well," Shipman said as he shook the hand of his old colleague and fellow revolutionary, "a couple of years ago, we turned the place upside down." "Yes," Heventhal replied. "And some of it stuck!"

Editor's note: This story originally appeared in the October 1996 issue of the WPI Journal and is a continuation of A Miracle at Worcester: The Story of the WPI Plan (Part One)

Read the second part of The Story of the WPI Plan