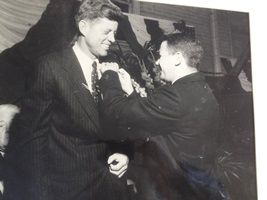 On the eve of the 50th anniversary of the assassination of President John F. Kennedy, a never-before-seen film of the future president has been rediscovered by a fraternity at Worcester Polytechnic Institute (WPI).

In the 16-millimeter film, which is less than two minutes long, then-Senator Kennedy is shown receiving a pledge pin from Donald Ferrari '59, president of WPI fraternity Phi Kappa Theta (then Theta Kappa Phi), on the night of Oct. 2, 1958, at the Worcester Armory. In addition to Senator Kennedy, future First Lady Jackie Kennedy and JFK's brother Robert Kennedy can be seen in the footage. At that time, Theta Kappa Phi was dubbed a "national fraternity for Catholic men." Since Kennedy was Catholic—and later became the first Catholic president of the United States—the video holds historical significance.

The story behind the video is equally compelling. Frank Pakulski '59, now living in Vermont, was preparing to move to a new house about 10 years ago when he came across a reel of film marked "PKT Pledging." Pakulski, recalling that Kennedy's visit occurred on the same day as the fall rushing for the fraternity, played the film and saw history relived. The video was only recently shown to current and past members of WPI's Phi Kappa Theta chapter, and has not been shown publicly—until now.

Len Dutram '59, now living in Pennsylvania, had the duty of keeping JFK, RFK, and Jackie Kennedy occupied at the Armory until the fraternity rushing concluded at 9 p.m. To this day, Dutram often asks himself, "Did that really happen?"