The search for WPI’s new president has come to a spectacular conclusion. 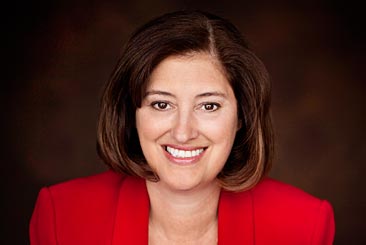 Guided by the recommendations of the WPI community, and the service of the two committees appointed to evaluate the large pool of outstanding candidates, the Board of Trustees has unanimously elected Laurie Leshin, PhD, as the university’s 16th president.

Through the diligent work of the community and the search and advisory committees, the qualities of our next president were clearly identified. Our next leader would possess superior academic credentials, extensive administrative leadership experience, and superb communication skills. This person would bring vision and energy to our community.

We have exceeded our expectations in attracting Laurie Leshin. Impressive by any measure, Laurie brings exceptional academic credentials from some of our nation’s leading universities, as well as tremendous experience and expertise from her time spent in leadership positions at NASA. She is an academic who understands the role of – and the potential for – academia in the larger world, and is well positioned to take WPI to an even higher level of excellence and prominence.

Over the past 20 years, Laurie, a geochemist and space scientist, established herself as a leader in academia and the public sector. She has cultivated an impressive career at NASA, Rensselaer Polytechnic Institute, Arizona State University, and University of California, Los Angeles.

Most recently Laurie served as Dean of the School of Science at Rensselaer, overseeing six departments, more than 30 undergraduate and graduate degree programs, six research centers, and over 250 faculty and staff. During her time at Rensselaer, she established new interdisciplinary research directions and opportunities; implemented significant curriculum innovations; established fundraising initiatives; increased the faculty and their research endeavors; improved diversity, and significantly increased the School of Science’s communication and outreach. Laurie also continued her extensive research and national service during her time at Rensselaer in three important ways: through her work as a funded science team member for the Mars Curiosity Rover mission, through her appointment by President Obama to the Advisory Board for the Smithsonian National Air & Space Museum, and through her appointment by former Transportation Secretary Ray LaHood to the Advisory Board of the US Merchant Marine Academy.

Leshin joined Rensselaer after spending six years as a senior leader at NASA. She joined the agency in 2005 as director of science and exploration at NASA’s Goddard Space Flight Center, where, as the head of NASA’s largest science organization, she was responsible for the strategic management and organization of more than 300 PhDs working in fields ranging from high-energy astrophysics to climate change. In 2008, Leshin was promoted to deputy center director for science and technology at NASA Goddard, a center with 3,200 employees and a $3 billion budget, responsible for the strategy, planning and implementation of 50 earth and space flight projects. During her time in that role, Leshin initiated and expanded partnerships with universities, with industry, and with other government organizations. As the senior scientist at NASA Goddard, she communicated NASA achievements and plans to numerous and diverse audiences, including a presentation to Her Majesty, Queen Elizabeth II.

In 2010, Laurie was tapped to join NASA’s Exploration Systems Mission Directorate in Washington, D.C., the organization responsible for future NASA human spaceflight activities.  As deputy associate administrator, her work involved daily oversight and planning for the implementation of the largest proposed shift in human spaceflight activities since the end of the Apollo program.  In that role, she and the associate administrator oversaw a budget of $4 billion and a nationwide workforce of over 15,000; she also worked extensively with Congress, the White House, industry, and the public to communicate NASA’s plans and influence support for – and authorization of – its vision and programs. Leshin sought to catalyze a worldwide space exploration movement by engaging with international space organizations, and through oversight of development of new technologies and robotic missions–including commercial capabilities for low Earth orbit transport and new technologies that would allow for humans to travel destinations deeper in the universe.

Prior to joining NASA, Laurie was a scientist and professor at ASU from 1998-2005.  Her successful research program focused on geochemical analysis of meteorites, the origin of the solar system, water on Mars, and astrobiology.  In 2001 she was named the Dee and John Whiteman Dean’s Distinguished Professor of Geological Sciences, and would go on to help lead the development of the first-of-its-kind interdisciplinary School of Earth and Space Exploration at the University.  Laurie also served as director of the Center for Meteorite Studies at ASU, which houses the largest university-based meteorite collection in the world.

Laurie began her academic career in 1994 as a University of California President’s Postdoctoral Fellow at UCLA in the Department of Earth and Space Science.  She spent four years at UCLA, where she was also named a W. W. Rubey Faculty Fellow.

In 2004 Laurie received the NASA Distinguished Public Service Medal, and in 2011 she received NASA’s Outstanding Leadership Medal. She is a recipient of the Meteoritical Society’s Nier Prize for her research.  She has served on the Board of Directors of Women in Aerospace, the Council of the American Geophysical Union.  The International Astronomical Union recognized her contributions to planetary science by naming asteroid “4922 Leshin.”

I would like to take this opportunity to thank the people who served on both the Search Committee and the Advisory Committee, in particular Jack Mollen, who served as Search Committee chair. These committees were composed, in total, of eight board members, seven faculty members, three staff members, two students, and one alumnus to vet the candidates. This was a rigorous search, and those individuals were impressive in their dedication to this effort, and to the quest of finding the right person.

I would also like to thank Phil Ryan for his continued service to the university during the interim period. Phil stepped away from his duties as Board chair to serve his alma mater through an exciting period.  His warmth and collaborative approach have been greatly appreciated campus-wide, and his leadership skills will continue to be put to good use as he continues his role as interim president through June 30.

Laurie will be on campus Feb. 11-14, and plans are under way for an event where she can meet with faculty, staff, and students.  Her first official day on campus will be July 1, 2014.

From: Warner Fletcher, Chair of the WPI Board of Trustees, Phil Ryan, Interim President