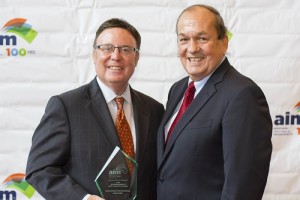 Since its founding 150 years ago, WPI has been sending its grads off to make contributions to science and society around the world. But on September 16 the university was honored for an important contribution right here in its own neighborhood, as a recipient of the Associated Industries of Massachusetts (AIM) Next Century Award.

The AIM award, presented during a celebration of the industry organization’s 100th anniversary, recognizes WPI’s creation of Gateway Park, which transformed brownfields and underutilized factory buildings off I-290 and Lincoln Square into a center of research, innovation, and commerce.

In presenting the award to WPI and three others, AIM president and CEO Richard Lord reminded the gathering at the Hanover Theatre for the Performing Arts that Central Massachusetts companies were prominent among the manufacturers that joined together in 1915 to form AIM with the goal of promoting economic opportunity for the people of the Commonwealth.

All four recipients exemplified the “transformative and lasting power of economic opportunity,” Lord said, with their vision and leadership allowing Central Massachusetts residents to work, support families and build lives for themselves while making the region a wonderful place to live.

“WPI has long played an important role in the Massachusetts economy by preparing students for a world increasingly driven by technology,” Lord said.  “In 2006, the school broadened its influence by turning a swath of old and underutilized factory buildings off Interstate 290 into a center of research, innovation and commerce. 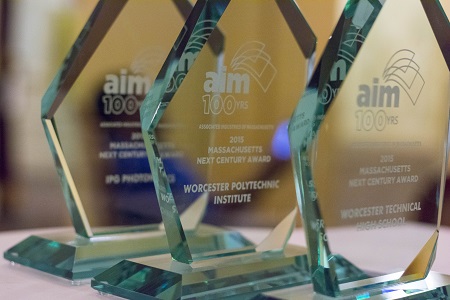 “It is in many ways a striking metaphor for the changing nature of the Massachusetts economy.” 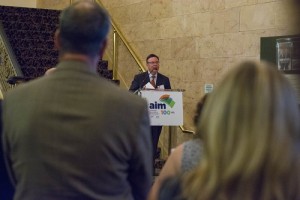 In accepting the award on behalf of WPI, executive vice president and chief financial officer Jeff Solomon said that throughout its history, WPI has adhered to the principle  “What’s good for Worcester is good for WPI.”

Since WPI’s founding in 1865, the university has worked with industry to understand its needs and opportunities, and to educate students with a curriculum that balances theory and practice so that they could leave the university well suited to become leaders, he said.

“This is a great honor, and WPI is thrilled to receive this award for our work in redeveloping what was once a brownfield into the now thriving Gateway Park neighborhood,” Solomon said. “… This manifests itself in many ways, but given the focus of this event, I will just tell you that economic development is in WPI’s DNA.”