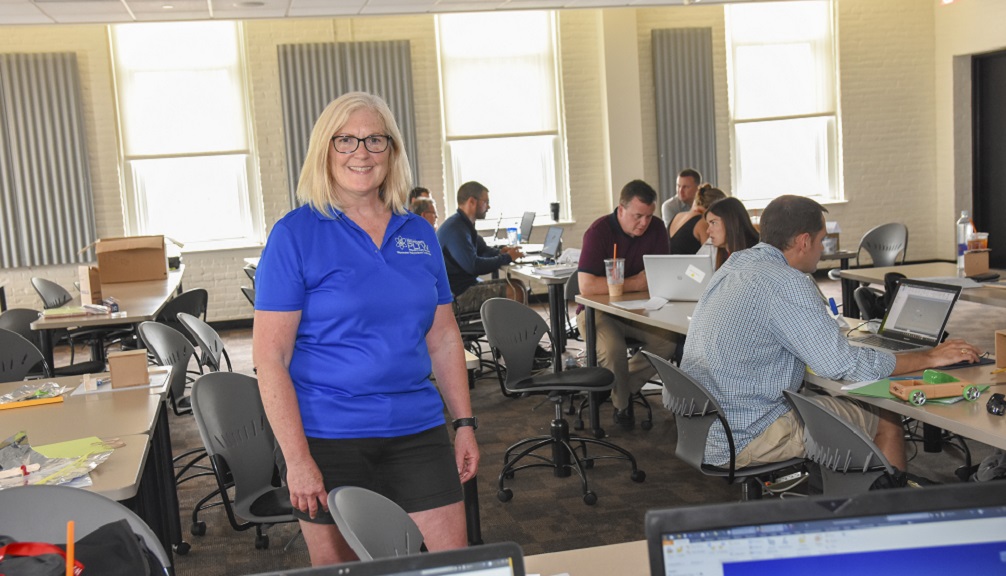 Pre-College Engineering Education (PCEE) has selected Martha Cyr, executive director of the STEM Education Center at WPI, for its Lifetime Achievement Award for her body of work as a nationally recognized authority on K-12 educational outreach. The organization is a division of the American Society for Engineering Education (ASEE).

“I’m truly honored to be recognized for my contribution to engineering education for pre-college kids,” says Cyr, who started working in this area of education in the mid-‘90s at Tufts. She taught engineering and was the founding director of Tufts University Center for Engineering Educational Outreach. She joined WPI in 2003.

“It’s kind of neat to be able to look back at all the programs and initiatives that I helped to start, especially as every one of them is still in existence today,” she says.

Cyr says she’s proud to have been the first person WPI hired to a position solely dedicated to K-12 engineering education outreach, and to represent the Institute at the national level as the STEM Education Center executive director. The STEM Education Center builds upon WPI’s dedication to supporting PreK-12 learning by engaging with members of the education community around STEM, including future and current teachers, administrators, and educators of all kinds.

By any standard, Cyr has accomplished a lot in her career. At Tufts, she played an active part in the state’s revision of its K-12 curriculum frameworks, resulting in a learning strand called Technology/Engineering. In 2002 she was part of the team that created the ASEE K-12 division.

She was a founding member of Central Mass STEM Network, now housed in the STEM Education Center. She has served on two National Academy of Engineering committees, the most recent being the Committee on Future of Center-Based, Multidisciplinary Engineering Research. She has served on the advisory or executive boards of 12 grant projects or engineering education focused groups, chairing the committee work on two of the boards, and is chair of the ASEE PreCollege Engineering Education Division.

Cyr’s work in K-12 outreach and undergraduate teaching has produced six journal publications, 11 proceeding papers, and more than 30 presentations. She has headed the creation of three educational resources: the Prentice Hall Science Explorer middle school science series of texts, the Making the Connection series of resources for introducing engineering, and the LEGO Mindstorms for Schools Using ROBOLAB series of texts. She was a founding partner in the TeachEngineering.org free online resource for teachers. In all, she has been PI or co-PI on 49 funded projects, for which she has brought in support at a level in excess of $15.2 million.

“When they said they wanted to nominate me for the award, I thought, ‘But, I’m not done yet!’” she says.

“I’m truly honored to be recognized for my contribution to engineering education for pre-college kids...It’s kind of neat to be able to look back at all the programs and initiatives that I helped to start, especially as every one of them is still in existence today.” -Martha Cyr

She’s currently focused on ways to increase the number of Massachusetts students who get to experience quality STEM learning with Project Lead the Way (PLTW) curriculum. PLTW is an organization that develops STEM curricula for use by U.S. elementary, middle, and high schools.

Cyr also wants to work on ways to “take teachers who are already good and make them exceptional,” including content pedagogy and other kinds of supports throughout the school year, she says.

And, she’d like to see more teachers introducing engineering concepts in lower grades and even in pre-school.

“Not everyone has to be an engineer, but engineers think differently about things,” she says. At Head Start in Worcester, for example, they’re working with kids to use the engineering design process to help them identify issues and come up with solutions, “teaching them to be problem-solvers.”

Even though there’s still much to do, Cyr says the Lifetime Achievement Award “is a really nice recognition that reflects the impact and depth of my work.”