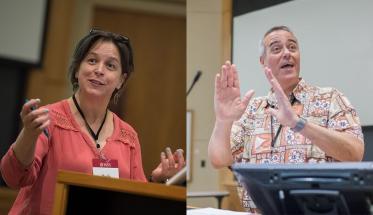 Project-Based Learning at Home and Abroad

Project-based learning is an integral aspect of a WPI education. It’s an invaluable part of students’ academic experiences that sets them apart from their peers after graduation, preparing them for their careers. Thanks to the Center for Project-Based Learning, run by director Rick Vaz and associate director Paula Quinn, other colleges and universities around the world can work with WPI to further develop their knowledge and skill at providing a project-based education for their students. This work is done either through the annual Institute on Project-Based Learning or via tailored consultations and workshops.

Over 150 faculty and administrators from more than two dozen colleges and universities attended this year’s institute. Soon afterward, Quinn and Vaz gave their first overseas workshop at TECSUP, a technical training institution in Lima, Peru, during the summer.

Plans for the workshop began after Quinn met Jorge Bastante, TECSUP’s director of quality and innovation, at a problems-based learning workshop at the Frontiers in Education Conference in 2016. Quinn and Vaz then held a series of discussions to start developing the workshop.

Although they would be working with TECSUP to figure out how to further implement project-based learning into the school’s curriculum, Vaz and Quinn didn’t have plans to act solely as teachers.

“We learn a lot every time we work with an institution. We’re closing in on about 100 college and university clients with whom we’ve worked, and we expect we’ll learn things at TECSUP that will inform our work in the future.” -Rick Vaz

“We learn a lot every time we work with an institution,” Vaz said before departing for the workshop. “We’re closing in on about 100 college and university clients with whom we’ve worked, and we expect we’ll learn things at TECSUP that will inform our work in the future.”

“It felt good for me to know that the approach we were there promoting was really well aligned with TECSUP’s pedagogy.” -Paula Quinn

With 95 percent of respondents in a post-workshop feedback survey saying their participation fostered a desire to use project-based learning in their work, it’s safe to say that the workshop was a success.

“It was intense work, and the participants remained strong through to the end of the second day, keeping on topic in small group discussions and solidly working on developing implementation plans,” Quinn says. “They then shared the plans with us, and those plans convey that real, detailed, and implementable steps are being taken to make project-based learning an even bigger part of the TECSUP culture.”

She was also pleased to learn that in addition to prioritizing innovation and creativity, much like WPI, TECSUP takes a holistic approach to working with their students. They are invested in the emotional and mental well-being of their students, something that aligns well with the overarching goal of project-based learning—fostering growth of the whole student.

“It felt good," says Quinn, "for me to know that the approach we were there promoting was really well aligned with TECSUP’s pedagogy.”