Changing lives, one robot at a time with Taskin Padir 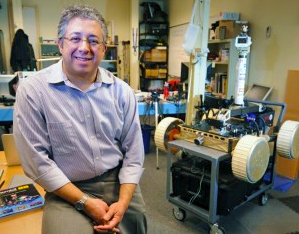 “I am a true believer that robots will continue to change how we live our lives,” says assistant professor of robotics engineering Taskin Padir. “As the science and engineering of robotics improve, they will find more and more applications in our homes, hospitals, schools, and common places”.

Padir’s most recent research certainly serves as evidence of this phenomena. He has been working on projects in the Robotics and Intelligent Vehicles Research Lab—funded by federal agencies such as NSF, NASA, and AFRL and companies like Mathworks, AGCO, Clearpath Robotics, Maxon Motor, igus, Adept MobileRobots, and Draper Laboratory—in order to develop “capable, robust, and adaptable” robots that will assist humans. More specifically, Padir has been collaborating with colleagues from Northeastern University to design a power-wheelchair robot arm system controlled by brain signals intended to aid individuals with locked-in syndrome so that they can perform daily tasks. He notes that the autonomous wheelchair is aimed to be displayed in May during Cornell Cup USA at Walt Disney World.

Padir notes that when he accepted his position at WPI, he looked forward to the opportunity to participate in groundbreaking projects such as these and the chance to simply to be involved with the first undergraduate degree program in robotics engineering. He received his bachelor’s degree in electrical and electronics engineering from Middle East Technical University in Ankara, Turkey, and his master’s and PhD in electrical engineering from Purdue University. In his current post, he has designed and taught courses at both the undergraduate and graduate levels, advised projects, and conducted research projects that involve the modeling and control of robot systems. “More important,” he says, “I have a lot of fun working with robots and learn a lot on a daily basis from my students and colleagues.”

The enthusiasm Padir expresses about working with his students was reflected in his receipt the 2011 Romeo L. Moruzzi Young Faculty Award for Innovation in Undergraduate Education, as well as the Inaugural Rho Beta Epsilon Award for Excellence in Robotics Education in 2010. Additionally, a number of robotics teams he has advised have been very successful in NASA competitions. For example, in 2011 and 2012 WPI earned the top spot at the RASC-AL Exploration Robo-Ops Competition. Padir assisted the team of 15 undergraduate students who constructed two rovers, one of which participated in NASA’s test event Desert RATS in Arizona in 2011. The other was featured in WPI’s NASA Centennial Sample Return Robot Challenge, and he notes that the group is “continuing the development on both rovers and implementing more autonomy.”

Whether Padir is helping craft robots designed to assist those living with a disability or locating and collecting rock samples during competitions, he emphasizes the importance of “cross-pollination of ideas” in his lab. “In all my research and educational projects I try to involve students from all levels,” he says, “freshmen to seniors, master’s to PhD candidates, and even high-school interns.” Padir also expresses a desire to use this practice in his future projects, which included demonstrating a small aerial vehicle at Wright-Patterson Air Force Base in May and the NASA Centennial Sample Return Robot Challenge in January 2013.