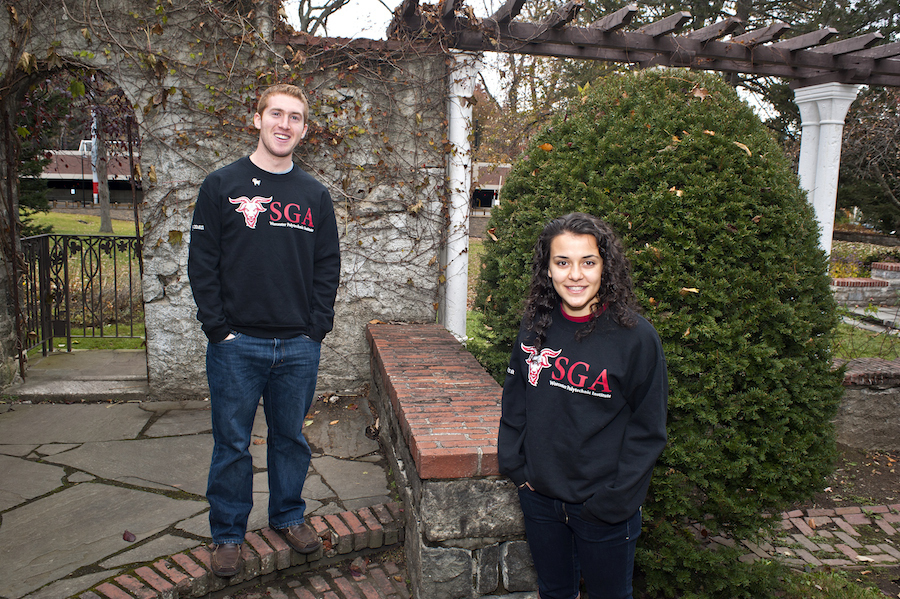 For Hyman, being elected WPI student government association president was the culmination of three years of campus involvement. The mechanical engineering major (and robotics engineering minor) joined the SGA as a freshman and served on several committees before becoming SGA treasurer. Apart from politics, he is also a member of Phi Kappa Theta fraternity, a community advisor, and a Crimson Key tour guide.

“By allowing students to pursue their passions, we create a happy and driven community,” says Dutra.

Dutra, also a mechanical engineering major, is the current SGA secretary. She is a member of Phi Sigma Sigma sorority, Engineering Ambassadors, and the Student Alumni Society. In addition, she has served as a community advisor.

And while they are excited to get to work (beginning in C-Term), taking office will have to wait because both will be in New Zealand. An interim president and vice president will be named for that period.

Both have clear ideas of what they would like to accomplish during their term in office. To Hyman, giving students a better understanding of the ways the SGA can help them is a primary goal.

“Students often are unfamiliar with what SGA does and can do, and SGA is an incredible resource that more students can go to and share ideas. If a year from now you walked around and asked students what SGA does on campus, and they could share something insightful, we would have made a positive change,” he says.

Dutra says she would like to expand the responsibilities of the Committee on Internal Affairs (CIA). At present, CIA’s main function is to oversee document changes and elections, but she believes there is much more the committee could be doing, such as taking charge of membership development events for the SGA.

“A trend I’ve seen in SGA over my years in the program has been that not everyone who is elected senator is on the same level with their leadership skills,” she explains. “I’d like CIA to plan an event once a term for the entire senate that could help strengthen the members’ leadership skills.”

Naturally, setting goals and determining what needs to be addressed requires having some idea of what is important to the student body. Hyman has observed that students feel strongly about student life, which he believes is enhanced through the SGA’s support of clubs and organizations. While in agreement, Dutra takes it a step further and advocates encouraging students to “pursue their passions.”

“If you talk to 10 students, you’ll probably find 10 different passions that motivate them. By allowing students to pursue their passions, we create a happy and driven community―which is an underlying reason why many people chose WPI,” she says.

When asked what personal qualities are needed to be successful in their positions, distinct but complementary styles became evident. Where Dutra lists being organized having strong planning skills as most important, Hyman stresses approachability and being someone students are comfortable engaging in conversation.

Both recognize that there are issues unique to WPI. As the university continues to grow, Hyman would like to ensure that undergraduates remain the focus. Dutra, more specifically, would like to make women feel more welcome in the STEM fields.

“Women bring a totally different perspective to engineering, tending to have a focus on wanting to create things to help people,” she says. ”A challenge for WPI is, how do we hook girls sooner?”

Both agree that a strong student government can enhance the college experience. Hyman believes the SGA has the ability to make “incredible” improvements to the campus community. In light of what’s going on in Washington, Dutra prefers flexible to strong.

“I want students to know that SGA wants to work with them about their concerns or ideas.” she says. “We need to be strong in the fact that we’re a cohesive, driven group, but flexible to accommodate the unexpected things that are brought to us.”