Storming the minefield: How psychology and chemistry are helping WPI men’s hoops to new heights 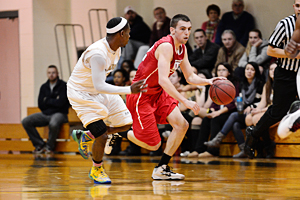 Young teams are not supposed to win. Generally, young teams come with a negative term to describe their season: rebuilding.

Luckily, building is exactly what quality engineers do.

At 22-0, the WPI men’s basketball program is having its best start of the season ever—a school record—and the team is ranked 2nd  in the NCAA Division III basketball poll, also its highest-ever ranking. WPI’s 22 wins in 2012-13 are only equaled by Division I power Gonzaga.

Without a true superstar, credit is passed around evenly on a team that has true depth. Five players have been leading scorers, nine players average at least nine minutes per game, and all players carry some amount of intangibles.

Read about the latest game here.

The team approach employed by the basketball squad mirrors the pioneering and collaborative project-based curriculum that has become WPI’s calling card for more than 40 years. Just as student teams at WPI tackle projects that lie at the intersection of science, technology, social issues and human need, the basketball team has worked tirelessly to create harmony on the hardwood.

And perhaps the most significant human need this year comes in the form of 5-foot-8 Spencer Wood, according to head coach Chris Bartley. Wood has not logged a single minute of playing time this year, but his work with the team has given the youthful WPI squad a decisive focus.

Wood, a renowned sports psychologist who assisted the University of Florida when it won back-to-back national championships last decade, was brought on board thanks to an athletic department grant. He has installed a process-driven approach that helps players and coaches compete at a high level without getting too far ahead of themselves. The approach takes the clichéd “one game at a time” concept to a more illustrative and functional level.

“Stay in the minefield,” says Bartley. “It's about not looking behind you or too far forward. What we need to do as a team is to stay in the moment and concentrate on every possession.”

“The past is in the past,” says senior Joe Wesoloski. “It's about practice tomorrow and that’s it. The approach is helping us getting better every day.”

From a coaching standpoint, Wood encourages Bartley on the “three F’s” of dealing with player mistakes: flush it, fix it, and forget it. Bartley says that if he is able to recognize the mistake, he should not dwell on it, but use verbal cues with players in order to fix the problem, and forget about the mistake in an effort to focus on the current minefield.

Finding flaws to fix on an undefeated team is not impossible. Despite a perfect record, opponents are officially outrebounding WPI on the season. Along with defensive FG percentage, Bartley says there is plenty of film to break down and room to improve. The key to success, however, is a trait players say they must continue to demonstrate.

“Work,” says Zach Karalis, who is shooting an astonishing 60 percent from three-point range. “We believe that we’ll work harder than you when game time comes.”

“The way we work and the way we practice carries over,” says freshman guard Aaron Davis.

With the team acing psychology early in the season, another college course comes to mind with the 2012–13 Engineers: chemistry. Despite 10 underclassmen on the team, Coach Bartley  assembled a team with many different personalities and skills that have meshed fast and strong.

Sophomore guard Sam Longwell credits the freshmen for coming into the season with confidence, Karalis credits the senior leadership for making it easy for younger players to come out of their shells and contribute to the team right away.

In short, the qualities this year’s team possesses has led  to a balanced attack with no unnecessary drama over who gets the limelight from game to game.

The season, however, has already had its share of drama: Davis sinking a buzzer-beating three-pointer to defeat Fitchburg State, a riveting overtime win on the road over Husson, and dismantling nationally ranked Rhode Island College. WPI has boundless confidence as it enters the heart of its NEWMAC League schedule.  Following the NEWMAC Tournament in late February, WPI has the potential to make a deep run in the national tournament.

The ceiling is high, but no one in a minefield looks far ahead for long.

“We want to make the tournament and win as many games as possible,” says Davis, “but you can only get there one day at a time.”