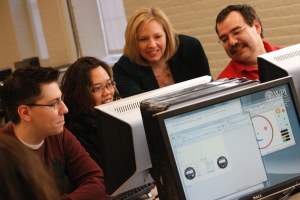 In a new podcast on the website of Science magazine, Shaaron Ainsworth of the University of Nottingham in England discusses an article she co-authored in the Aug. 26, 2011, issue of Science reviewing research that explores whether encouraging students to draw helps them learn science. When asked to point to studies that have been especially effective at identifying the advantages of drawing in science education, she singles out the work of two researchers: Peggy Van Meter at Penn State and Janice Gobert, associate professor of social science and policy studies at WPI and co-director of the university's new graduate program in learning sciences and technologies.

In the article, Ainsworth and her co-authors cite a 1999 study by Gobert ("Effects of student-generated diagrams versus student-generated summaries on conceptual understanding of causal and dynamic knowledge in plate tectonics") published in the Journal of Research in Science Teaching. In the study, fifth-grade students were asked to read some text about plate tectonics. One group was told that they would be drawing diagrams at intermittent points in the text to represent what they were learning. Another group was told that they would be writing brief summaries of the text. A control group was just instructed to read the material.

Tested later, students who were asked to summarize the text surpassed the other groups in their rote recall of the details presented in the text; students who were instructed to construct diagrams outperformed the other two groups in their ability to synthesize the material and create mental models of the spatial, causal, and dynamic concepts they had learned. "Being told that they would need to construct diagrams about the text changed the way students acquired and processed the information," Gobert says, "and the process of drawing concretized these ideas, so students were later able to answer higher-level questions."

In a 2005 study, Gobert added a new comparison group: students who were asked to explain the text while they read. The idea was to test to see whether the results of the previous study were due to the activity of creating intermediate representations--whether drawings or written descriptions—or the act of engaging in deeper learning. She found that the students who constructed drawings or wrote explanation of the text were equally adept at constructing complex mental models based on what they read. "Students who merely summarized the text acquired a lot of rote information, but this tended to be low-level knowledge that does not lead to inference making or transfer to other tasks. Additionally, the students didn't synthesize or retain the information. Students who know they will need to explain the material, either verbally or through diagrams, gain a deeper understanding of the content."

In more recent work, Gobert has used reading time software to study how students' knowledge acquisition works when they are told that they will need to draw, explain, or summarize. Students who were told that they would need to construct drawings or written explanations of the concepts they were reading about tended to linger at the same points in the text. "They slow down at places where they encounter information that helps them construct mental models," she says. "It is in an indication that both tasks—drawing and explaining—promote the kind of deep processing that leads to lasting knowledge." Building on these results, Gobert is currently engaged in research aimed at helping students become more skillful readers of science texts by using eye-tracking technology and an on-screen pedagogical agent (a cartoon dinosaur named Rex) to encourage students to consult accompanying diagrams at the proper times to help build rich mental models of the phenomena they are learning about.

In fact, much of Gobert's ongoing research involves extending and applying her earlier work on the power of diagrams and visualizations in science learning. She has spent several years developing a tutoring system for science learning that is built around micro-worlds—highly accurate simulations of natural phenomena that enable students to formulate hypotheses and then test them by conducting experiments. This virtual and highly visual hands-on exposure to the scientific method helps students learn to "think like scientists" by developing inquiry skills while they also gain a deep understanding of scientific concepts. The system also logs every action students take as they work on problems; then, using educational data mining techniques guided by colleague Ryan Baker, assistant professor of social science and policy studies, it is possible to assess how well they are learning the concepts and developing their inquiry skills, while also providing real-time adaptive tutoring to strengthen those skills.

You can listen to the Science podcast about Gobert's earlier work on diagraming here. The Interview with Shaaron Ainsworth begins at about 22 minutes, 15 seconds. The reference to Janice Gobert's research can be found at about 27 minutes and 20 seconds.