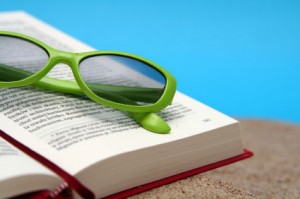 For the third consecutive summer, the WPI campus will host a reading group for faculty, staff, and students. It’s not your typical light beach reading, however; in keeping with the mission and spirit of a technological institution of higher learning, the subjects are more academic than romantic.

“You could argue that summer is a time for easy and free stuff, but we’ve had a lot of success with pieces that are provocative or sometimes considered dry reading,” says group organizer Chrys Demetry, associate professor, ME.

It all began in 2011 in a discussion among Demetry, Kate Beverage (assistant director, ATC) and Christine Drew (associate director of research and instruction services, Gordon Library).

It sprang from a desire to explore topics of academic interest and discuss them with anyone who was interested in the same topics, Demetry says.  They opened the group to anyone who was on campus in the summer and wanted to spare the time.

The combination seemed to work. “People really like the diversity in a discussion group,” she says. The discussions are held in groups of 10 (limiting the numbers gives everyone a chance to participate), facilitated by the organizers. Each group meets once or twice.

That first summer was popular enough to continue the group for a second summer (adding a film), and now for a third. In typical WPI fashion, the method of choosing the subjects is, of course, scientific: the leaders solicit suggestions, survey levels of interest (using Survey Monkey), and choose the topics of most interest to the majority.

Teaching for Critical Thinking: Tools and Techniques to Help Students Question Their Assumptions (2011) — by Stephen Brookfield

Quiet: The Power of Introverts in a World That Can’t Stop Talking (2013) —by Susan Cain

The One World Schoolhouse: Education Reimagined (2012) —by Salman Khan

College (Un)bound: The Future of Higher Education and What It Means for Students (2013) —by Jeffrey Selingo

The subjects are more likely to be the kind educators would like to have the time to read and share with their colleagues during the busy term time and are, not surprisingly, centered on education, with a good smattering of technology talk, of course.

This year’s film posits an opposite opinion from last year’s:  Two Million Minutes shows students in the U.S. whose academic preparation is not nearly as rigorous as their counterparts in India and China. Last summer’s Race to Nowhere: The Dark Side of America’s Achievement Cultureis one that claims our academic rigor focused on testing is pressuring America’s schoolchildren.

For organizers  Beverage and Demetry, along with Mary Beth Harrity (director, ATC) and Tracey Leger-Hornby (dean of library services), choosing topics is easier than the finding the time for participants who are interested in the same subjects to get together.

“Scheduling is the worst thing,” Demetry says. “There’s so much that faculty is trying to do in the summer.”