Getting students to work on real-world math problems that come directly from business, industry, and government

The program, Preparation for Industrial Careers in Mathematical Sciences (PIC Math) is an initiative of the Math Association of America (MAA) and the Society for Industrial Applied Mathematics (SIAM), and has been run by Weekes and Michael Dorff of Brigham Young University, co-founders of the program. 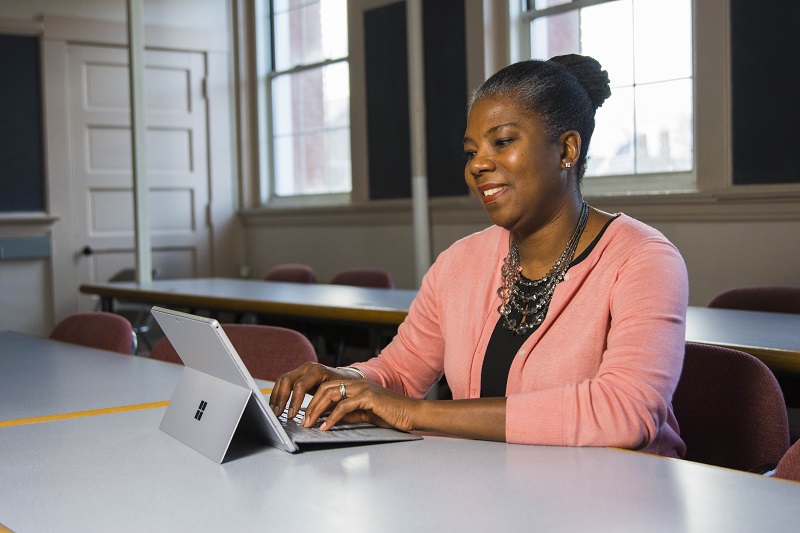 PIC Math is designed to get mathematical sciences students and faculty working on real-world math problems that come directly from business, industry, and government and to get students ready for a future where they can put those skills to good use, Weekes says. Through the program, modeled in part after WPI’s Major Qualifying Project (MQP) program, students have an opportunity to discover what a future as a mathematical scientist in industry looks like and how math can unlock careers and opportunities.

The National Science Foundation (NSF) and the MAA reached out to Weekes and others in 2013 to devise a program to help undergraduate students and faculty members be more aware of nonacademic careers and internships, and to also offer students the opportunity to work on research problems from industry. She and a few of her colleagues got together and submitted a white paper to NSF that same year, and NSF subsequently asked for a full proposal. The proposal received a $2.5 million grant to support work with three cohorts of faculty members and their students. Faculty members were admitted into the program in 2014, and each year thereafter, Weekes says. PIC Math has received another $1.5 million commitment from the NSF to continue work for a few more years.

“WPI’s mathematical sciences department has made connections in industry for 20 years, but this is not something most mathematical sciences department do,” Weekes explains.  “But now with the PIC Math program we have already been able to work with math faculty from over 100 universities across the US giving over 1,400 undergraduates the experience of working on research projects that have come directly from industry.”

“Like our WPI students,” she says, “these students will have worked with a team on a research project and can talk about the constraints of working on open-ended projects that have a real impact with a beginning-and-end solution. It is a very creative thing, looking for a solution or an approach to gain an understanding.”

The experience PIC Math students gain makes them more attractive to employers, she says. “They have something to discuss that they had a solid hand in, and they can speak with quite a lot of engagement, passion, and knowledge, and can answer questions.”

Each year faculty members admitted to the PIC Math program attend a three-day workshop held at Brigham Young University in Utah during the summer. At the workshops, Weekes, Dorff, and industry colleagues explain to faculty members how to approach and talk to business and industry leaders about problems that students could help them solve. During the fall, the PIC Math faculty members make connections with industry to obtain problems for their students to work on. Weekes also solicits projects from her industry friends as an additional resource.

“WPI’s mathematical sciences department has made connections in industry for 20 years, but this is not something most mathematical sciences department do. But now with the PIC Math program we have already been able to work with math faculty from over 100 universities across the US giving over 1,400 undergraduates the experience of working on research projects that have come directly from industry.” -Suzanne Weekes

In the spring semester, PIC Math faculty members run a course where teams of students work with a business partner researching the problems to come up with solutions. Each student team writes a 12-page report and records an oral presentation of their work that Weekes sends out to industry mathematicians for assessment and feedback.

In the summer, PIC Math students present their work at the MAA MathFest conference or at the SIAM Annual Meeting.

Weekes received her PhD in 1995 and has always worked in academia—20 years at WPI—but recognizes that not everyone can get a job in academics, nor wants to.

Those trained in mathematical sciences have diverse career opportunities, she says, including in quantitative and data analytics, the aerospace industry, design—in research labs, epidemiology, cybersecurity, the actuarial field, and consulting.

Weekes was also executive producer for the PIC Math Industrial Case Study videos, all filmed in Worcester, that depict how math is used in industry. Jonathan Adler Nolis—who has a mathematical sciences bachelor’s degree from WPI and a master’s from WPI in applied math—is featured in one of the videos and talks about the data-driven business decisions he helps companies make.

Derek Kane, mathematician at DEKA Research & Development Corp.—a company owned by Dean Kamen ’73 and recent inductee into the WPI Hall of Luminaries—is interested in regenerative medicine that creates new organs using a patient’s own cells to replace organs damaged by trauma or disease. Kane thinks that, as part of the engineering process, it is necessary to predict the path that growing tissue will follow as cells expand and multiply, and he asked a PIC Math student team to explore the idea of using a Voronoi diagram to describe the geometry, forces, and dynamics of cell growth.

Chris Teixeira '06 of MITRE, did a project to determine when promotion from within a company or hiring from outside proves to be the better employment strategy.

Sara Del Valle of Los Alamos National Labs provided a project with the goal of determining if Internet data can be used to monitor and/or forecast Zika incidence in countries affected by the virus.

“It is so cool that students get to work on ‘now’ problems,” Weekes says. “With a standard, back-of-the-textbook homework problem, someone’s already solved it. But, these are live, ‘now’ problems that are of current, active interest to a company, that people haven’t solved before—and they need to get some understanding and some answers.”