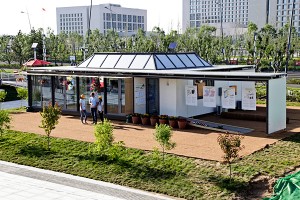 Team BEMANY is ready to take on Datong!

We heard from Linda Looft after her Beijing VIP event that “The heat and pace are beyond anything I’ve ever experienced.” Here are some excerpts from her July 31 email.

“…We are safely settled here in Datong. It’s a far cry from cosmopolitan Beijing. Even though it’s a city of four million, it’s like a very large country village in comparison. That seems an oxymoron, but it’s very true.

The Solar Village is a marvel of activity rivaled only by the surrounding area, which is a large-scale city expansion beyond anything we would ever see in the U.S.–housing, offices, businesses, and more being built for millions. We ride by miles and miles of construction, marveling at the scope and scale, and have been told that much of the buildout was developed around SD China and has only happened in the past eight months.

“We spent from mid-morning until 8 pm at the Solar Village. Students, faculty, and staff are all working around the clock. They are amazing! Hard-working, dedicated, and full of good humor despite their obvious exhaustion.

“They passed construction, systems, and safety inspection yesterday and have until noon today to finish before final inspection. The staging and fit out of the kitchen, etc., come next and need to be completed for that inspection. Meanwhile, they’re rushing to repair the sagging roof (they had to find a replacement electrical part in a land without hardware stores or even parts that remotely resemble American construction materials). They spend hours devising solutions to problems that could be solved in five minutes with a trip to a Home Depot. (We are sooooo spoiled.)

“Adding to their concerns, the container with all the T-shirts, hats, and sundry team branding items (a judged criteria!) were being held in customs for weeks and no one knew how to get them released. I was planning to call our new contact at the American Embassy to beg for help, but it all got delivered while we were en route from Beijing, prompting shouts of joy heard throughout the village. It could be overwhelming, but they’ve learned to work around the problems in a different culture and to get the job done. We can be VERY proud of the WPI team.”

Linda went on to share her amazement at the enormity of the project area and at the feeling of closeness the team shares with their SD China volunteers. On Friday we heard from the team’s WPI faculty lead, Professor Tahar El-Korchi, that Solatrium has passed all its inspections and is ready to exhibit and compete.