WPI to partner with NASA and WGBH for the June 11 event, which will feature robots, rockets, and even an astronaut 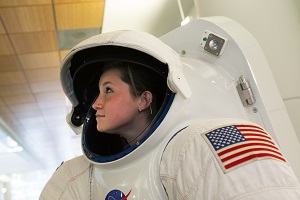 One of the region's largest interactive science, technology, and robotics festivals is returning to Worcester Polytechnic Institute (WPI) on June 11, 2016.

TouchTomorrow is free, family-friendly festival that features hands-on activities and exhibits designed to inspire children, teens, and young adults to explore the thrill and fun of science and technology. The event will be held from 10 a.m. to 4 p.m., rain or shine, and includes exhibits presented by WPI, NASA, WGBH, and a wide variety of museums, educational organizations, and companies.

The fifth anniversary festival will feature some favorite NASA exhibits, including the asteroid landscape, the Roll-over Rover, the famous MARCBot IV Rover, and the Mark III space suit. This year NASA is introducing its Virtual Reality chairs with monitors and Oculus glasses that take users on a planetary tour. Visitors will also have the chance to meet and hear from Charlie Precourt, former NASA Chief Astronaut and veteran of four Space Shuttle missions.

WPI will also welcome back to campus Paul Ventimiglia, Class of 2012 and BattleBots 2015 World Champion. His robot, BiteForce, won the competition on national television and will defend the title this summer when the hit show returns to ABC prime time on June 23. In addition to BattleBots, Ventimiglia has had a number of victories in robotics competitions. In 2009, while still a student at WPI, he led a university-sponsored team in NASA's Regolith Excavation Challenge. He will discuss what it takes to build an award-winning robot and give an insider’s look at the advancement in robotics.

For the third year in a row, WGBH will serve as the official media partner for the festival. A national leader in the effort to expand science, technology, engineering, and mathematics (STEM) education in the classroom and at home, WGBH will host multimedia activities for students and STEM enthusiasts of all ages at TouchTomorrow. A number of popular WGBH characters, including Curious George, will make appearances throughout the day.

Among other activities, attendees at TouchTomorrow may

TouchTomorrow follows the NASA Sample Return Robot (SRR) Challenge, a Centennial Challenge competition to be held June 7-11 on WPI’s campus. The challenge—created to drive competition and innovation among individual inventors, students, and private companies—requires teams to design and build an autonomous robotic system that will locate and collect geological samples without human control. For more information on the SRR Challenge and a list of competitors, visit here.

"Every year, TouchTomorrow allows the WPI campus to become a hub of amazing interactive exhibits designed specifically to excite young people, families, and teachers about science and technology," said WPI president Laurie Leshin. "The festival is the perfect way to cap off the NASA Sample Return Robot Competition. It is tremendously gratifying to welcome some of the most innovative robotics engineers from across the country to campus; it is also amazing to be able to show people of all ages that science, engineering and technology is amazing, fun, and critical to making the world a better place, and to empower them to envision their own futures in those fields."