One is a gruff outsider who nearly saw victory in a previous year—but had to be knocked out of the competition due to a nasty nut allergy. 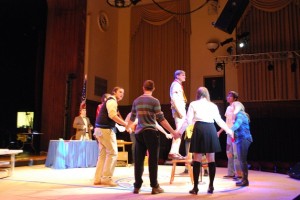 Another is recovering from a hiatus after an “unfortunate incident,” and feels like the only sane one in the bunch.

Then there’s the overzealous former champion who’s never quite moved on from her victory—and thus lives vicariously through each year’s competitors.

These are just a few of the compelling, quirky, and endearing characters in The 25th Annual Putnam County Spelling Bee, a one-act musical comedy being showcased in a production this weekend by VOX Musical Theatre, WPI’s student musical theatre company.

“There’s something in the show for everybody, as the different kinds of humor come from many different kinds of characters,” says aerospace engineering major Timothy Jones ’18, who plays vice principal Douglas Panch. “You’ll be laughing one minute at the show’s jokes—some of which change every night—then you’ll see how these characters are all surprisingly human, and you’ll really feel for them and their problems.”

The show will be performed in Alden Memorial tonight and tomorrow night at 7:30 p.m., and on Saturday at 2 and 7:30 p.m. Tickets are free.

Prior to each show, four members of the audience will be randomly picked and screened to participate as characters. 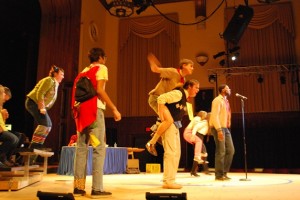 Based on a book by Rachel Sheinkin, with music and lyrics by William Finn, The 25th Annual Putnam County Spelling Bee follows six tween-age spelling aficionados—and those on the proverbial sidelines cheering and jeering for them—attempting to spell their way to victory in an annual competition. Along the way, they sing, dance, share their aspirations and goals—and, in a unique aspect of the show, welcome audience members onstage to fumble their way through words right along with them.

“It provides a really fun challenge for the actors who have to channel their inner awkward tween,” says director Douglas Davis ’16, an interactive media and game development major. “Everyone remembers how awkward their middle school years were, and this show capitalizes on that.”

And at least four audience members at each performance will get to relive that prepubescent squeamishness. Just prior to each of the three shows, a quartet of viewers will be randomly picked and screened to participate as “ridiculous characters,” Davis explains. 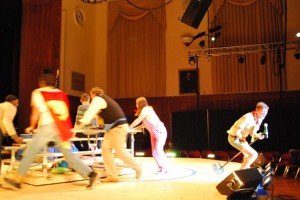 Given that, “anything can—and probably will—happen,” said Matthew Zielonko ’17, a computer science major who plays 12-year-old William Barfee (the one whose aversion to peanuts forced him to bow out of the 24th annual Bee). “It’s going to be a new show every single time we go on stage—not just for the audience, but for the cast, pit, and tech, as well, which is going to be a lot of fun.”

His character has a secret spelling trick: A “magic foot,” as Zielonko explains, with which he traces out words on the floor prior to saying them aloud. A veteran of musical theatre—he’s been performing since he was 5—Zielonko described Barfee as not equipped with a large cachet of friends, and a little hard to get to know at first—but once people do, he has them laughing with his witty sense of humor.

“I’ve never had to play a villian-ish character before, so it’s a lot of fun to get to be mean,” he says, also noting that Barfee is quite the dancer. Calling the overall experience a “challenge,” he said “it puts me out of my comfort zone.”

Meanwhile, Sonya Maria Douglas ’16, an independently designed major in biopsychology also minoring in musical performance, portrays Rona Lisa Peretti, who won the Bee 22 years prior, and considers her role hosting the bee the highlight of her year. She reminds everyone of her own personal winning word, syzygy—as defined: when the moon aligns with the earth and sun—and is, as Douglas put it, wacky but sincere, and “a little over the top about everything.”

She watches the Bee “with the intensity and awe of some sports fanatics,” says Douglas, who has been involved in musical theatre since the third grade and described an “extra energy and passion” in it that she hasn’t found with other types of theatre. “Being that over the moon about a spelling bee is pretty silly,” she adds, but “it makes for some very entertaining moments.”

Emphasizing that the VOX show is free, she encourages people to come see the production more than once. “If you have time, you have no excuse—unless you are just allergic to fun,” she jokes.