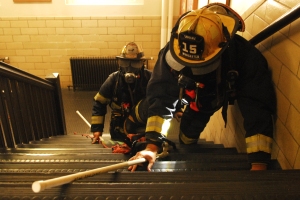 A decade ago, the loss of six Worcester firefighters in a warehouse blaze put a spotlight on the need for new technology to help locate and track first responders who may become lost, trapped, or incapacitated inside buildings. Since then, WPI has become a recognized leader in the development of precision indoor location systems.

By founding the annual Workshop on Precision Indoor Personnel Location and Tracking for Emergency Responders, WPI's research team has also played a pivotal role in advancing this area of research and development and promoting the need for academic, corporate, and government researchers, funders, and the first responder community to work together to advance the mission of providing lifesaving technology for the men and women who save our lives.

The fifth edition of the workshop, on August 2 and 3, 2010, brought together nearly 140 participants who received encouraging news about progress being made by WPI and other research teams toward solving the difficult challenges involved in pinpointing people--in three dimensions--when they venture where GPS doesn't work.

Three developers agreed to put their technologies through a rigorous real-world trial conducted by members of the Worcester Fire Department. The tests, which involved firefighters in full turnout gear being guided by the location technology to a missing colleague, attracted print and broadcast reporters, who saw how these systems can provide a life-saving benefit by significantly reduce the time needed to rescue a first responder.