Every year, millions of people operate vehicles while intoxicated. In many cases, people that consume over the legal alcohol limit are not in a state of mind to know they are too intoxicated to drive. Researchers at WPI believe that if people have hard data in front of them, which shows that they are over the legal driving limit of alcohol consumption, they will be more likely to call for a ride instead of drive intoxicated.

WPI researchers have developed an app, AlcoGait, which uses accelerometer and gyroscope chips built into many smartphones to passively analyze a user’s walking patterns in order to detect the user’s BAC level. Users may increase the app’s accuracy by recording a sample of their sober walking patterns with the app, and AlcoGait may work in the background to sense when a user’s swaying motion exceeds the recorded sober threshold. Once AlcoGait detects excessive sway, an alarm activates and a user’s phone displays a message warning them that they are too drunk to drive. Other interventions can be integrated into the app in future, such as automatically texting a friend, calling a ride service, or activating a kill switch to shut off a car when the app detects the user’s BAC to be over the legal driving limit (or other threshold). 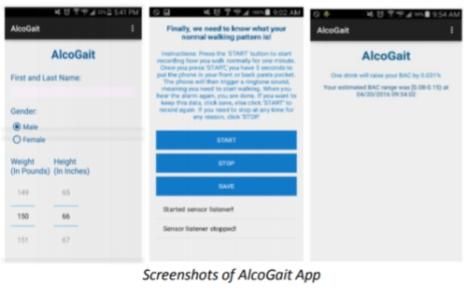