Actuators and Methods of Use (Hydro Muscle)

Description of Market Need: Actuators which are lightweight, efficient, fluid, fast, muscle-like compliant, and cost-effective are critical for advancement of robot actuation. The Hydro Muscles presented here are simple novel actuators that meet all these requirements. Still further, they can be easily rescaled to meet desired size and preferred force and torque output. They may be utilized as modular building blocks for robots that can be rapidly assembled and utilized as either perform-alone or wearable robotic systems.

They can be an excellent educational tool for moderate-budget robotics classrooms and labs. They can utilize either air or ordinary tap water and effectively operate even at standard household pressures of about 0.59 MPa (85 psi). A single source can actuate many muscles by flow and/or pressure control.

There are many attractive applications for this technology. For example, in the medical field these muscles can be used as soft actuators for everyday assistance or for rehabilitation and physical therapy, they can be used in both labor and the military as method of augmenting strength, and they can be used as a soft-robotics alternative to virtually all rigid robotic motors and actuators.

The Hydro Muscle has a single fluid flow opening and is comprised of an inner and an outer structural element. The inner element is a smooth tubing made of an elastic material such as latex. An added non-stretchable sleeve, outer element, is made of a soft, inelastic material, such as polyester, to limit radial expansion while promoting lengthwise expansion when pressurized. The product is constructed using common materials, making it an extremely low cost solution for both medical and robotic applications.

Hydro Muscles are more ideal in performing pulling vs pushing tasks; a pressurized muscle could bow when subject to a constant distance between attachment points (e.g. due to heavy load). Bowing can be remedied with a rigid guiding element or non-stretchable sheathing i.e. “skin” enclosing the “skeletal” structure and muscle.

Benefits: The Hydro Muscles store inner element’s elastic energy when pressurized and releasing it to contract. This inherent elasticity makes them suitable for power augmentation paradigm; release of muscle’s stored energy onto load can be much faster than transferring a pump’s energy into the muscle.

Hydro Muscles are highly efficient actuators; there are almost no losses due to heating of working fluid, and latex within 100% strain range performs almost as an ideal spring, Additionally, the muscle is limited to expansion in only one dimension, which offers a higher energy density.

As verified experimentally the Hydro Muscle strain can be more than 300%.

According to a review of all popular artificial muscles, studied by the team from Columbia University, Miriyev et al, and published in journal Nature communications in 2017, the Hydro Muscle has the best strain and energy efficiency properties combined.

A notable feature that the Hydro Muscles have in common with conventional hydraulic and pneumatic actuators are that a single motor unit (i.e. a pump) can power many actuated degrees of freedom while electrical motors with non-fluidic actuation can typically only actuate a single degree of freedom. Moreover, in case of a wearable system, a conventional pump can be easily positioned more proximally to the center of mass without adding distal masses close to the joints. Finally, hydraulic based transmissions are often more easily implemented than gearing mechanisms for pure mechanical transmissions.

Hydro Muscle is more compliant than traditional hydraulic cylinders, making it better suited for use in human rehabilitation and augmentation.

Hydro Muscles has been already used for upper and lower limbs’ prosthetic devices and braces, biologically inspired robots, and exoskeletons.

Competing Approaches: Other artificial muscles, such as the most popular McKibben muscle, are similar to the disclosed invention in the respect that they are soft, fluid-actuated and able to be locked in place. In difference to the Hydro Muscle, the McKibben muscle contracts when pressurized and elongates when depressurized.  A large portion of the McKibben’s hydraulic energy is not transferred onto the load as it is instead used for radial expansion of the muscle. This loss is significantly less in the case of the Hydro Muscle due to the non-stretchable sheathing preventing elastic tubing from substantial radial expansion. The efficiency of the pneumatic McKibben muscle is even smaller due to air being compressible and thermodynamic heating losses. Silicon based designs have additional losses on the order of 30%. The McKibben muscle has also very limited strain (<60%) due to its double helical mesh and hence it cannot mimic biological muscle strain (in difference to Hydro Muscle). Still further, when McKibben muscle contracts, pump’s power is transferred directly onto load without option for power augmentation (again in difference to Hydro Muscle). 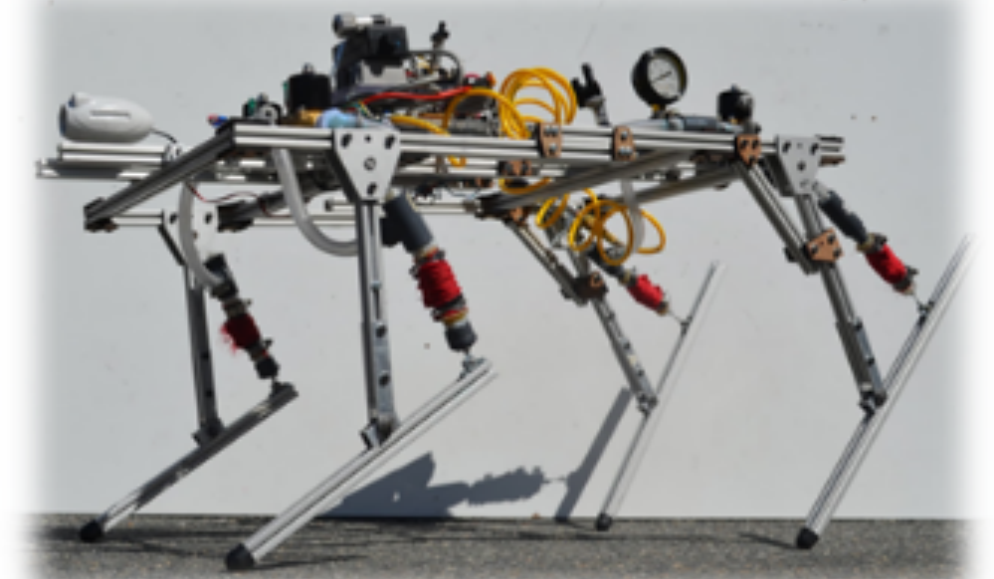 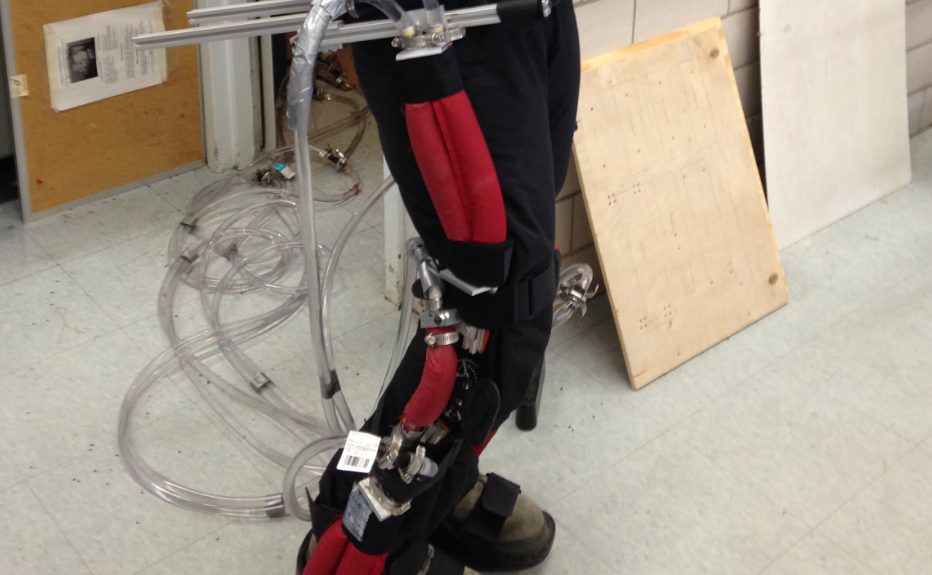 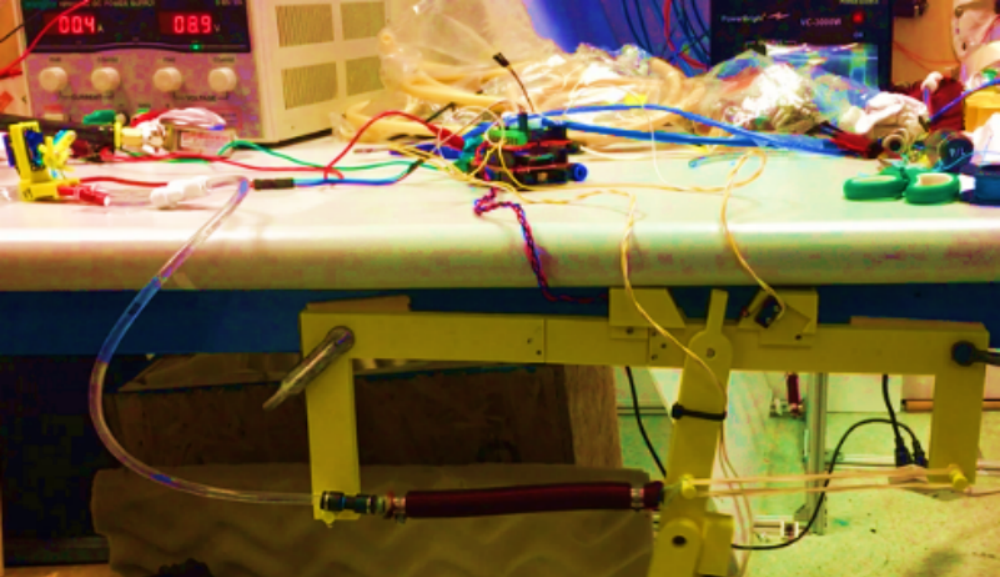 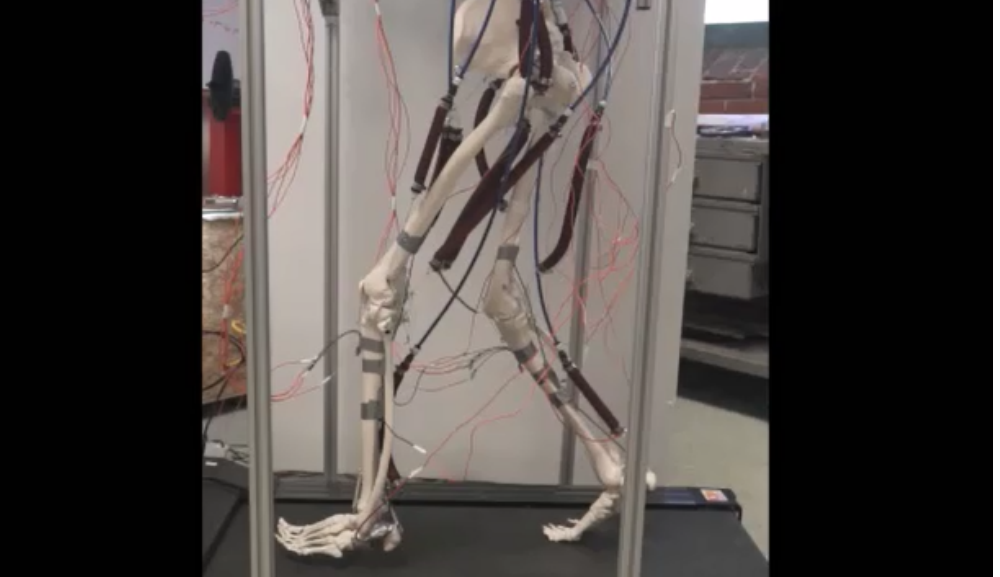 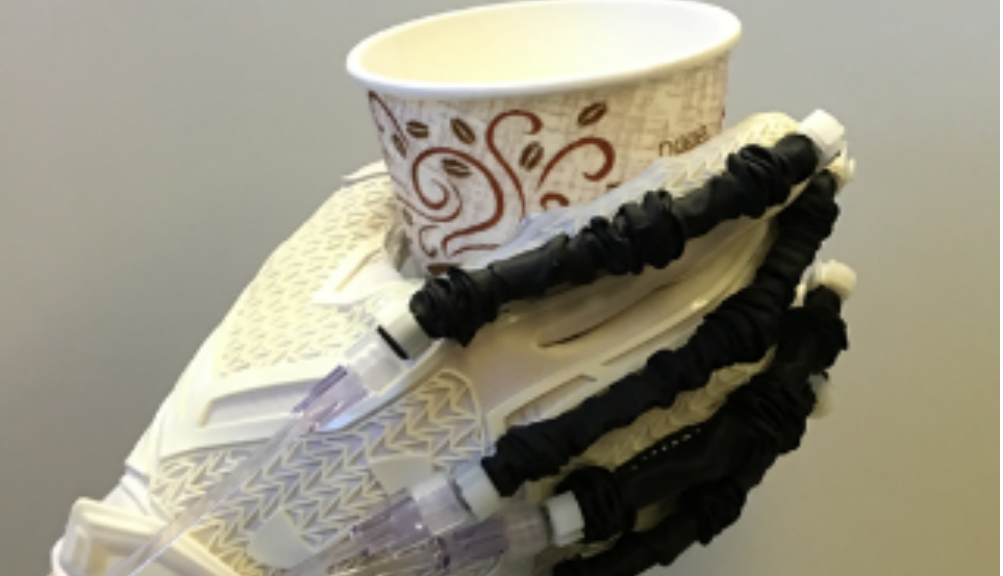