Nearly 80 percent of the U.S. population is unable to see the Milky Way galaxy from their homes at night, according to the World Atlas of Artificial Night Sky Brightness. The reason for these obstructed views? … light pollution caused by high levels of artificial light illuminating the night sky.

A team of WPI students recently spent seven weeks investigating and working to prevent light pollution in one of the last remaining spots where the Milky Way is visible: Acadia National Park in Maine.

Their project, referred to as “Dark Sky,” was a continuation of work done by consecutive IQP teams since 2013. All of the projects were sponsored by Acadia National Park and involved staff members from the Friends of Acadia nonprofit organization. They all have the same ultimate goal of preserving the night sky in Acadia by mitigating light pollution stemming primarily from the nearby town of Bar Harbor. 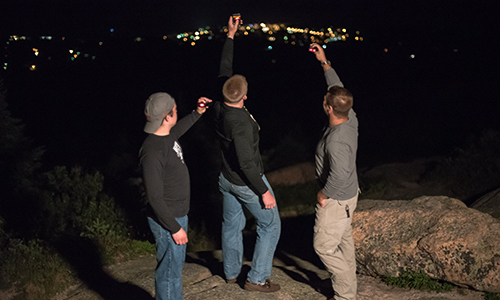 “Acadia National Park has been known for years as a place that retains the last quality night sky up and down the East Coast of the United States,” says Stephanie Clemente, conservation director, Friends of Acadia. “WPI students have been helping us with measuring the quality of the night skies in the park and also working to look for the problem areas.”

WPI students have been helping us with measuring the quality of the night skies in the park and also working to look for the problem areas.

This year’s team was charged with updating previous measurements and using them, along with other factors, to assess the feasibility of Bar Harbor becoming a Dark Sky Community, a designation given by the International Dark-Sky Association to communities that meet strict criteria in regard to lighting ordinances and community outreach.

There are several forms of light pollution, but the team focused primarily on measuring sky glow, an increase in the brightness of night skies caused by the presence of high numbers of artificial lights. In order to do so, they spent multiple nights deep in the woods of Acadia pointing Sky Quality Meters (SQM) at the sky. 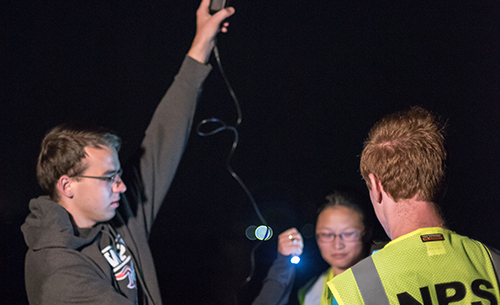 “We went out around midnight and took measurements throughout the park in forests and on roads,” says D‘Agostino. After analyzing their results, the students determined that since 2015, light pollution in Acadia has increased by .33 percent.

While the change may seem small, Clemente says the findings surprised her.

“I didn’t expect any change in the quality of our skies,” she says. “It doesn’t seem like there has been a lot of development in the area, and multiple local towns have lighting ordinances that should help protect night sky quality.”

To investigate further, the students assessed Bar Harbor’s lighting code and walked throughout the town to update inventories of lighting fixtures. They found that both the actual lights and ordinances fell well short of Dark Sky lighting specifications, notably in regard to maximum lumen output and the use of light shields.

The team had productive discussions with the local Conservation Commission about working with the town to adopt new ordinances; they also saw promising signs of support from the community.

“This project definitely needs both town and public approval to move forward, as it is very much a community initiative,” says D‘Agostino. “Fortunately, judging by past ordinances, people in the area place value on being environmentally friendly." 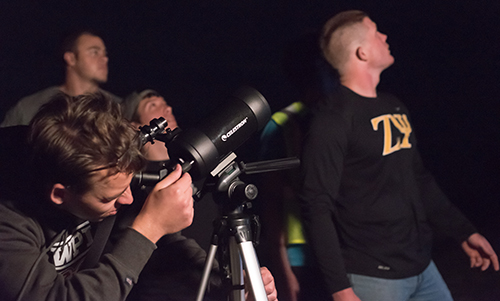 As a second activity, the students created a website to educate the public about the initiative and provide tips for residents and business owners about how to conserve electricity. The website notes that if businesses switch to LED lighting they will recoup installation costs within two years and continue to save money through reduced electrical costs.

The students are hopeful the website, along with the rest of their efforts, will have a positive effect, but they realize there is still a long road ahead.

“I think we had an impact, but it’s a multi-year project, so future teams will continue to work toward the ultimate goal of helping Bar Harbor become a Dark Sky Community,” says LaPierre.

I think we had an impact, but it’s a multi-year project, so future teams will continue to work toward the ultimate goal of helping Bar Harbor become a Dark Sky Community.

D‘Agostino concurs, adding, “We have laid a big chunk of groundwork, so I think next year’s team will have a lot to run with.”

Clemente is impressed with the results of the project and already has plans for next year’s team.

“I think the students have done an amazing job," she says. "They started us on a path to identifying sources of increased pollution by providing a baseline of information about commercial properties in downtown Bar Harbor. Perhaps next year’s group will expand their lighting inventory beyond Bar Harbor or include residential exterior lighting.”

She also appreciates the work that previous WPI teams have done to build up to this point.

“Every year we benefit from previous experiences and we get further in our research and our knowledge. WPI brings amazing resources that we really don't have access to here,” says Clemente. “I love having the students here each summer. I download their reports off the WPI website and I continue to refer to them every year.”