How can a national park that receives more than 3.3 million visitors each year reduce disruptive noise levels? According to a recent WPI student project, the answer may be as simple as putting up signs. 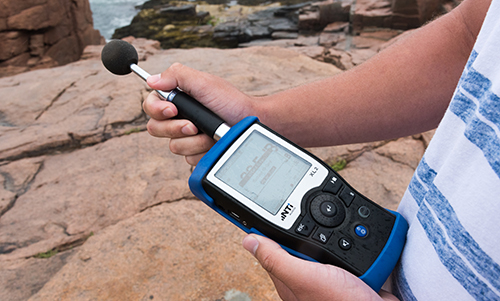 The project was sponsored by the National Park Service (NPS) in response to growing noise levels in Acadia, which is one of the most crowded parks in America due to its small size and large visitor numbers.

“Increased visitation creates a lot of noise that can disrupt the enjoyment of beautiful places,” says Abe Miller-Rushing, science coordinator for Acadia National Park under the NPS. “We want to avoid too much pollution from human-generated sounds, both for the benefit of the people visiting the park and the benefit of the wildlife living there.”

The NPS sponsored an earlier WPI student team in 2013 that determined that ambient noise levels in the park had likely increased since a baseline was created in 2009. This year’s project built on that study and others by evaluating noise levels in specific locations in the park. 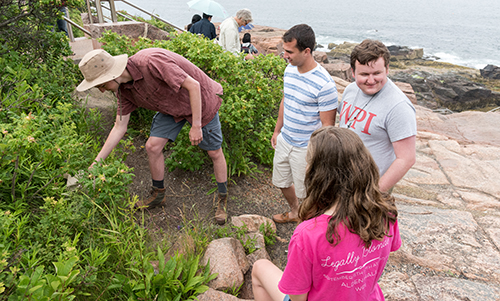 “The previous studies were concerned with investigating noise levels in remote areas, but what we really wanted to understand was how noise was affecting visitors in the most crowded places,” says Farnitano.

In order to do so, the students spent large amounts of time collecting data at four of Acadia’s most popular spots. They used a sound-level meter to record noise levels at 4.5-hour intervals while team members collected metadata according to guidelines developed by the NPS Natural Sounds Division and a 2011 study conducted at the Muir Woods National Monument by Robert Manning.

“We stood in each spot with a binder and wrote down everything we heard, like cars and motorcycles,” says Farnitano. “We also took panoramic photos every 15 minutes so we could tell how many visitors were present.” 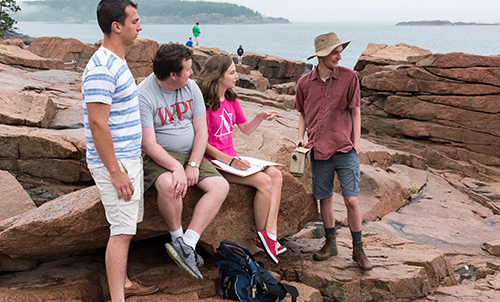 The students found that mean sound levels ranged from 51.09 to 63.73 decibels per site—far above the recommended threshold of 37 decibels at which enjoyment of nature becomes disrupted.

Furthermore, by comparing noise-level charts with their on-site observations, the students determined that the primary source of noise in all four areas was human voices, as graphs showed positive correlations between noise levels and visitor numbers, while noises from other sources, including vehicles and natural sounds, corresponded with both peaks and troughs in noise levels.

Miller-Rushing says that the students’ findings on noise sources actually provided a new direction for the park’s sound management efforts.

“I was surprised that the biggest source of noise at the locations they surveyed was people, rather than vehicles on the road, sightseeing flights overhead, or boats on the water," says Miller-Rushing. "Historically in Acadia, we have focused our sound management on vehicles.”

I was surprised that the biggest source of noise at the locations they surveyed was people, rather than vehicles on the road, sightseeing flights overhead, or boats on the water.

Once the students had determined the sources of most of the noise in the park, they moved on to the next step: finding ways to reduce that noise. While they researched more extensive solutions like constructing walls and building synthetic hills, the students ultimately decided to try a simple experiment: putting up signs that asked visitors to be more quiet.

The students based the experiment on Manning’s study in Muir Woods, which showed that noise was reduced after signs were displayed proclaiming the areas to be “Quiet Zones.”

“We made straightforward signs that asked people to keep their voices down, silence their cell phones, and encourage their children to walk quietly,” says Farnitano.

We made straightforward signs that asked people to keep their voices down, silence their cell phones, and encourage their children to walk quietly.

The team tested out the sign at one popular location, Jordan Pond, for three 4.5-hour sessions, during which they took sound measurements and counted visitor numbers. Subsequent analysis indicated that the signs had reduced noise levels by 26.4%—another finding Miller-Rushing had not expected.

“I was again surprised, this time by how successful a simple management technique like posting a sign declaring a quiet day at a sight might be,” he says. “The students did just a pilot test, but the evidence was intriguing, and worth following up on.”

There’s a good chance more WPI students will be involved in these upcoming efforts.

“We absolutely plan to work with teams of WPI students next year,” says Miller-Rushing. “I suspect we may follow up on the work of this year’s team by evaluating other management strategies. We are also really interested in getting maps of sound pollution in the park, which could inform our management and also help people find quiet places to explore, if that is the experience they want.”

The WPI students bring creativity and energy to projects.

He adds, “The WPI students bring creativity and energy to projects. By the end of this year’s project, we had good data and information we could act on and ideas that we wouldn't have generated on our own. That kind of result is gold in our (or any) line of business.”