In 2016, Acadia National Park in Maine welcomed more than 3.3 million visitors, making it the 8th most visited national park in America. Acadia is also one of the smallest national parks, as it covers just 49,000 acres. In comparison, the 7th most visited park, Olympic National Park in Washington, hosted a similar number of guests last year—but sits on 922,000 acres.

We have far too many people at certain places at certain times than the capacity of the facilities can handle, so there’s a real disruption of the visitor experience.

“We have far too many people at certain places at certain times than the capacity of the facilities can handle, so there’s a real disruption of the visitor experience.” says Kelly. “In addition, cars parking on shoulders are having an increasingly large impact on roadside vegetation, and the high demand from many vehicles threatens to change the historic character of some of the older roads.” 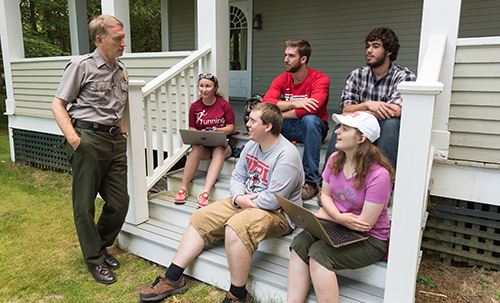 The NPS recently sponsored a team of WPI students to help mitigate these growing tourist congestion issues by conducting an Interactive Qualifying Project (IQP)—a team-based project that requires students to delve into problems that matter to real people—on the feasibility of implementing a park reservation system.

Jauris explains that while the team had originally envisioned assessing multiple parking lots, once they arrived and began exploring the area they zeroed in on one spot that offered an ideal case study.

“When we were preparing for the project we looked at many different lots," she says, "but when we got there we realized that the biggest problem is on Cadillac Mountain, the highest mountain in the park and one of the most visited spots because of its beautiful views.”

When we were preparing for the project we looked at many different lots, but when we got there we realized that the biggest problem is on Cadillac Mountain, the highest mountain in the park and one of the most visited spots because of its beautiful views.

The scenic mountain, which is also the tallest mountain on the eastern coast, quickly became familiar territory to the students. They stationed themselves at its summit to survey visitors about their opinions on using a reservation system and observe how long cars were parked in the lot during different times of the day. 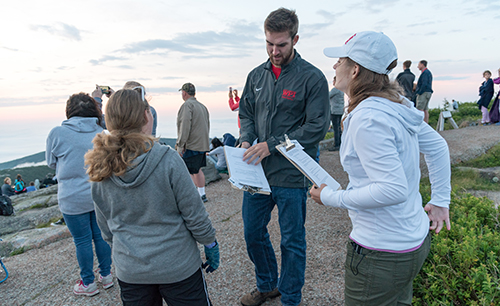 Findings revealed that visitors would prefer to make reservations through a website or mobile app and pay an average of $5, and that cars were generally parked for 30 minutes or less at all times of the day.

The students also assessed the suitability of the land at the base of the mountain to determine how best to implement a gate system there.

“Our goal was to reconfigure the drive to get visitors to Cadillac Mountain as quickly as possible without creating long lines,” says Jauris. “At the same time, we wanted to minimize the impacts on the environment caused by expanding the roadway.”

To complement their findings and observations, team members conducted extensive research on the design and implementation of various reservation and gate systems. They also looked at case studies from other national parks, including Haleakalā National Park in Hawaii, which is the first national park to require visitors to make a reservation to visit one of its summits at peak times.

Finally, the team used simulation modeling software to determine optimal configurations for a gate system and performed a cost-effectiveness analysis on the various structures. 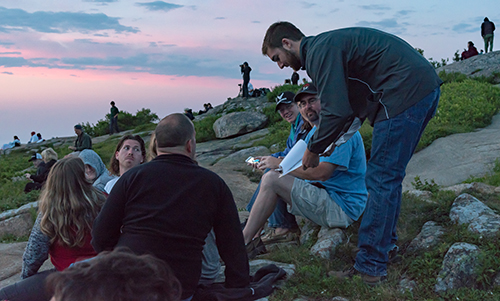 In the end, they provided the park with detailed recommendations for an online reservation system and connected mobile app that would require visitors to reserve spots during sunrise and sunset, and a gate system that would span two lanes of traffic and use automatic gates to read QR codes on printable reservation receipts. They further suggested that the park roll out the systems by conducting a trial for one-hour reservations during sunrise hours only.

Kelly hopes to use some of the students’ recommendations going forward as part of a new park transportation plan that is currently in the works.

Our goal is to finish the transportation plan by the end of 2018. Not everything can be put into action right away but, conceptually, a reservation system for Cadillac is something that could happen fairly quickly.

“Our goal is to finish the transportation plan by the end of 2018,” he says. “Not everything can be put into action right away but, conceptually, a reservation system for Cadillac is something that could happen fairly quickly.”

While he believes all of the findings will be useful, Kelly says he was particularly impressed with the structure the team designed for the gate system.

“We had long thought that implementing a gate system at the base of Cadillac Mountain was not possible because it would cause long lines of traffic to back up onto the main road," he says, "but the students did a really interesting analysis showing that it is possible using a two-lane solution.”

He also hopes to continue to involve WPI students with the upcoming transportation plan.

“Once the plan is finalized there will be a lot more work to do, and I could definitely see WPI teams coming on board to take a closer look at designing and implementing different parts of it,” says Kelly. “It is really valuable to have WPI students from all different majors bring fresh eyes to problems like this.”

He adds, “The NPS has really appreciated the growth in our relationship with WPI and its students over the years. When the Bar Harbor Project Center first opened, we were not really involved with them, but now we are fully engaged. Our top management staff regularly attend student presentations and feel they add a lot of value.”