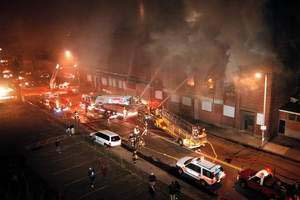 Fifteen years ago, on Dec. 3, 2009, the tragic Worcester Cold Storage warehouse fire devastated the city of Worcester and galvanized the nation. The tragedy began when two firefighters entered the windowless, maze-like building in search of two homeless residents who were believed to be inside. When they became lost, two other firefighters were sent in to look for them. A third team entered the building when the rescuers, themselves, became disoriented in the dense smoke. Ultimately, all six firefighters perished.

As he watched the procession of thousands of firefighters from around the nation who gathered that December to memorialize their fallen comrades, John Orr, professor and former head of the WPI Department of Electrical and Computer Engineering at WPI, wondered if there might be a technological innovation that could help rescue teams quickly locate and rescue lost or trapped firefighters.

He formed a team that included David Cyganski, professor of electrical and computer engineering and currently dean of engineering ad interim, and James Duckworth, associate professor of electrical and computer engineering. They began exploring a three-dimensional location system using radio transmitters worn by firefighters and receivers located outside of a burning building or carried by rescue teams.

Initially, the WPI researchers focused only on the problem of precisely locating firefighters inside buildings. Over time, they began to investigate solutions for many additional risks faced by firefighters and other first responders.

The background, rationale, and general goals of the original project are described in the first White Paper produced shortly after the Worcester warehouse fire, as well as an expanded White Paper.