As a direct response to the Worcester Cold Storage fire, the WPI team began exploring a three-dimensional location system using radio transmitters worn by firefighters and receivers located outside of a burning building or carried by rescue teams. They discovered early on that precise three-dimensional personnel location inside buildings, where GPS signals do not reach, is a daunting challenge, as radio signals bounce off walls, floors, and other surfaces, making it difficult to tell where they originate.

Over the years, the researchers, working with teams of graduate students, developed and tested multiple variations on their radio frequency technology, along with increasingly sophisticated computer algorithms that helped tackle the multipath challenge. This work brought them steadily closer to the overall goal of reliably locating firefighters in three dimensions to within inches using technology that is affordable for most fire companies.

In 2014, after a decade and a half of uninterrupted research, the team has taken major strides toward that target with new approaches that use radio frequency location alone and in concert with inertial navigation and image processing. 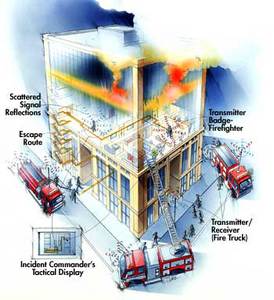 A team of WPI firefighter safety researchers were honored with the prestigious Fire Marshal’s Award at the 23rd Annual Firefighter of the Year Ceremony in Worcester in recognition of their significant contributions to the fire service. Read more...